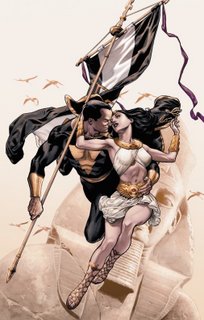 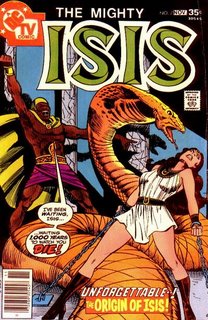 Why... I think it is!
Well, cetain design elements are different but that's pretty much the Isis I remember.

A quick story: I had a friend who was absolutely livid over other comic book companies' "stealing" of Marvel Comics' Thor. When he told me he was going to write Savage Dragon's Erik Larsen because he had the nerve to even name the hammer, Mjolnir. Furthermore, Larsen couldn't even be bothered to get Thor's hair color right.

I explained to him how mythic characters like Thor and Hercules aren't quite subject to copyright and that only the concepts that Marvel introduced within the Marvel mythos... no, actually, I just farted in his mouth while it was open and just walked away.

HA! Made ya look!
So, what I'm wondering is this: As far as I could tell, DC's never actually owned Isis outright. She was a character created specifically for television and DC went on to get the license, producing eight issues of the comics version. Has DC's gone and spent some of that good ol' Identity/Infinite Crisis money they've been making and gone and bought Isis or have they just licensed it again? Either way, I want to go on record as supporting any move, incorporating more raven-haired, mini-skirted women characters into comics.

Comments:
8 issues? I coulda sworn the comic lasted longer than that. It lost me pretty quick, though. Started out well, then the art went down the tubes.

Doesn't Image (or perhaps some other non-DC, non-Marvel company, but I think it's Image) have an Isis ongoing right now? That would seem to be an issue... no pun intended...

but why oh why must she hang out with Black Adam? He's BAD. and she's GOOD!

hmm...or maybe that makes sense after all....being a princess and all...

I had a crush on Isis when I was a kid, as I'm sure most of the pre-teen boys my age did back then.

"Oh zephyr winds that blow on high, lift me now so I can fly!"

Check out this Isis page. I'd say something about people with too much time on their hands, but I'm leaving a comment on a blog related to a show I watched 25 years ago and I maintain a Legion blog, so never mind.

I wondered if this was the TV Isis as well, or just another variation on making a superhero out of a mythological figure...

It would be nice to see the TV incarnation again, so I hope DC did buy the Filmation character

There is another Isis out there right now, but again, I don't think you can bar someone from making, say, a Hercules comic as long as you don't make him like the Sorbo Hercules or the Marvel Hercules...

Well, unless there's something dramatically different inside the book, this is ciearly the same Isis. Perhaps someone thought she was just another Fawcett property.

On the other hand, are there any survivors from Filmation to care whether she is or isn't?

"I had a friend who was absolutely livid over other comic book companies' "stealing" of Marvel Comics' Thor."

Actually, DC did a Thor-ish character in Tales of the Unexpected #16 drawn by Jack Kirby back in 1957. The story is similar in setting to the "Wild West Thor" story that John Buscema drew many years later.

For reasons I can't quite articulate or even fathom, I like the idea of Black Adam having a girlfriend. Especially if that girlfriend is The Mighty Isis (to quote the title of her comic). And yes, the comic only lasted eight issues. I know, because I own #8. An editorial note on the letter page says it was cancelled due to low sales.

The rights to Filmation's properties are owned by this company. Thanks Wikipedia!

I just assumed it was a "new" Isis meant to look like the TV Isis.

Oh, and the other current ISIS comic is from Alias, which is why no one can remember it.

That's too bad. If it had been Isis, I would have liked it if part of the licensing deal was that DC had to slap that nifty DC/TV logo on any book she appeared in.