Years of blood and sacrifice have brought him to this moment. Honing his mind to peak efficiency, culminating in the ability... 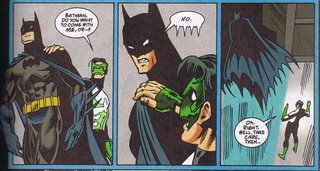 ...to spot a total idiot when he sees one.

That is Batman's superpower.

Comments:
I'd say being able to speak so coldly that icicles actually form on your word bubble is a superpower in its own right.

I'm surprised he didn't break Kyle's fingers for touching his cape without permission.

Dude basically defined Batman's modern look and gets no credit. I wonder what he's up to?

Taken out of context, some might say that Batman comes off as a jerk here. But in fairness, in the panel right before, Kyle had just announced that he was going to the bathroom.

So I totally see where Batman's coming from.

scotus: seriously? He was asking Batman if he wants to go to the bathroom with him? I like Kyle, but he deserves that reaction. Then again, are they on the Watchtower? I'd bet the bathroom's there can be kind of dangerous.

You don't tug on Batman's cape, either.

Do not touch the person of Batman.

By the way, what's up with Green Lantern's mask? Yikes.