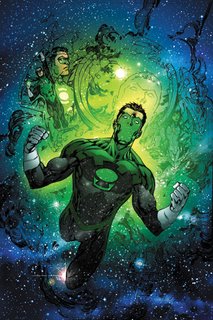 Y'know, if you really think about it, Kyle's mask/head kinda represents the vacuum of space....

Guess who got to review Ion #1 over at CHUD: Thor's Comic Column. Wanna read some of it? Here you go...

Contrary to popular belief, I actually do like Kyle Rayner. Well, maybe not as THE Green Lantern but...trust me, I do like him. Do I believe that he ever should have been on the same Justice League, much less, the same room as say…Batman? No. One thing about Kyle, though, just as sure as he could be counted on to say the wrong thing at the wrong time, one could just as easily count on him to, in times of crisis, always do the right thing. He wasn’t perfect but the kid had a good heart. You see, I actually think that’s the character’s appeal: Kyle is US as the superhero. Face facts, fanboy and girls: no matter how much we’d like to believe it, if we were dropped in The DC Universe and suddenly granted a Power Ring, more than likely our asses would not be JLA, we'd be more Doom Patrol than anything. That said, it’s a testimony to the character’s strength that with his never being the best man for the job and Harold Jordan be damned, it was Kyle who kept the Green Lantern concept strong for well over a decade. You’ve gotta respect him for that. Now, the new millennium finds him just as the cover of Ion #1 states: “Once a Green Lantern, now something more!”

Comments:
Kinda mean to tease us like that before today's CHUD is even posted...