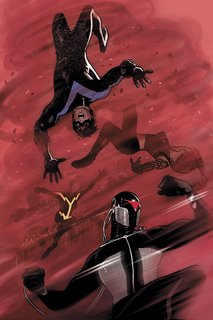 Devon (dialing) : "I'm calling because I'd like to reserve this space for a "flame war."

Blogosphere (answering) : "And what would be the nature of this "flame war" of yours."

Devon: "Oh, it's not my "flame war," per se but, it's gonna happen anyway so, I figure why not let it happen here at "Seven Hells!"

Blogosphere: "Again, sir. What would be the nat..."

Comments:
Damn it, Devon. I thought we all agreed to stop Outsiders, and here you go tempting us with tantilizing plot twists. Grrr...

Anyway, I'm sight unseen placing my bet on "The plot twist is terrible", with a smaller insurance bet on "Winick has an awesome idea, but will probably screw the presentation."

I stopped reading Winick back when he turned the Scarecrow into the Incredible Hulk. If you pay for this stuff, people, you just encourage them.

When you say "grabbed for the Pope's balls," do you mean a light cupping action or something involving a kung-fu grip and more than a few degrees of torque?

One of these characters is....TEH GHEY!

The evil speedster is Wally West, who not only is TEH GHEY and has TEH AIDZ, but inexplicably hates and resents Dick Grayson for metatextual reasons I best not comment on.

That's really all Judd has in his plot arsenal these days.

Martin's comments would make me laugh, if I wasn't afraid they were true.

And here I thought it was that Winick took up Devon's offer to have Dick, um, s*** a d*** for peace.

Guess I'll find out in a few hours.

Harvey:
He tugged down and came up with a few short 'n curlies.

He has ball smell on his hands.

Um, Devon? I read the issue, still confused. Why, exactly is that going to set the blogosphere on fire?

Okay, granted, people flipped out over an eye-patch, so anything's possible, but I'm missing the controversy here.

My LCS clerk flipped through it with me too, if he's doing what I think he's doing I'm going to be PO'ed.

Ok, not really, but I'd buy that five times before I buy another issue of Bruce Jones' interpretation of Nightwing as Dr. Jekyll (incompetent, insecure, witless) and Mr. Hyde (nymphomaniac with bad grammar).

Probably a clone or something. :-) Which has possibilities.

Hmm.. Well, St. *** does have an evil double wandering about, doesn't he? One of his main villains.

So, maybe it'll be okay.

oh... uh yeah, I agree with the Fangirls. I've seen *** in other titles, there serious hinkiness to ***'s appearence in Outsiders, and, in case you haven't been paying attention to Ragnell's blog, *** can be a scary, scary guy and was used as the bad guy not two months ago.

Besides, the only Saint in the DCU is Barry, and Waid used "him" as the bad guy back in '92!

Sorry, but I just can't get my dander up over this one. Totally with you on the outrages of the last issue (Jeeze Louise, that was bad!) but for now my dander stays down.

Do you really think Winick's use of *** will be anything other than one of his patented "shock-n-awe" plot devices?

Are we looking at another Scarebeast? Will we ever forget his use of two of comics' greatest villains, The Joker & Lex Luthor as nothing more than plot devices in the pages of The Outsiders?

His use of *** just makes my penis soft.

Having only flipped through the issue, it seems like he's just cribbing this plot from the Foundations and Great Darkness Saga stories in LSH.

Having read it, I actually like the way it's dovetailing with "Teen Titans" continuity. In TT, the Brotherhood are furiously looking to gather clone technology. In Outsiders, the team runs across an obvious clone, and will next run into the Brotherhood , who probably are also looking for the culprit.

Of course, what would make this even more interesting if that St. *** has, in fact, been de-aged, thus making the question of who the new **** will be a lot more interesting...

Can we say Clone Saga?

I'm starting to think Winick has no idea what he wants the overall plot to be and gets through each issue as he writes them, just barely making one story stick to the other. At first, he seemed to want the Outsiders to deal with real world things, and now there's evil clones.

The most important question is this: