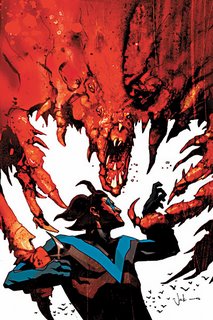 It happened. After the purchase of 119 issues, 796 artistic changes, a really "ghetto" Sopranos schtick & his rooftop rape, I just could not bring myself to pick up this month's Nightwing #120.

I blame Scip. Never has anyone nailed anything so on the head. I feel as though a fog has been lifted. The problem with Nightwing is "Nightwing."

I thought one of the ideas behind Infinite Crisis was to shine some light on Dick Grayson, return him to greatness, let him feel some warmth on his face again. So far, all I've seen him do is lay down with the first woman who flashes him some red & lets Jason Todd piss on his legacy as Robin & Nightwing.

Look, I realize that Dick Grayson is a man but part of being a man is remembering what it is to laugh. That means remembering what it was like to be Robin. We're getting too much of this: Nightwing, fighting a gang of thugs in a shopping mall, reciting inane inner monologue.

What should happen: Nightwing, fighting a gang of thugs in a shopping mall, somersaults in smiling, kicking ass & looking for the biggest prop he can bound from... and well, the comic should write itself from there.

When that guy shows up in a Nightwing comic, someone please, let me know. I know it'll be safe to come out again.

Comments:
I wish I'd passed it up, and I certainly will next month. In #120, we watch as Dick Grayson becomes a male model and then fights Resurrection Todd, his rival Nightwing, right there on the catwalk. The crowd, see, they think it's all part of the fashion show! (Which may sound like some Silver Age FUN but isn't. It's angsty drek; Adult Robin as a moody Derek Zoolander.)

aww,
I thought the catwalk scene was campy fun. At least Jason Todd seems to be enjoying himself in this title.

Is there breakdance fighting?

Bring back Vibe and he can do all that WHILE making you laugh...

must have been a lousy year off for Dick Grayson...

A little off topic, but did anyone else notice Nightwing in a few panels of 52? I was surprised to see him in the background while the heroes waited for the memorial service to begin. I mean, Dick's supposed to be on a boat with Bruce and Tim, what's he doing in Metropolis?

What do you think - bad editing on the part of DC or has JT taken on the mantle of Nightwing immediately after IC?

Tell them who got you thinking about this Devon. Tell them who came into the comic store Wednesday and mentioned his displeasure with Nightwing's direction. Tell them. I'll be waiting right here.

So, if Dick Grayson was supposed to be gone for a whole year on a world tour with Bruce and Tim, how did the two of them end up coming back okay, but he's gotten worse? Crossed wires in editorial or something? I mean, I know part of it is the writing, but the general IDEA of the direction of the book should be a bit more "upbeat" given the premise, I would think.

I would buy adult Robin as moody Derek Zoolander.

Bruce Jones' Nightwing is something else entirely - Adult Robin as a cast member of "Grey's Anatomy."