In Aztek, it was revealed every Justice Leaguer swears an oath to uphold the ideals of truth & justice upon the cloak of the DCU's original mystery-man, The Crimson Avenger. Today, brothers & sisters, we have been given a symbol of our own.
I read comics for the symbolism and the iconography. Nothing says, "I'm one of the good guys" more than this.

Nothing says strength more than that.
A few months, a new symbol revealed itself onto The DC Universe. A symbol encompassing, in its' simplicity, all the passion many-a-blogger has for The DCU. Scip has revealed unto us... 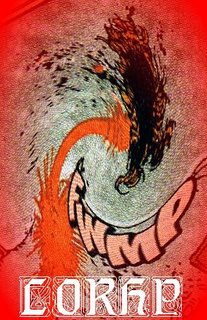 Comments:
you guys are just mean... funny, but mean

In a perfect world, DC would release this image as a poster, and Wizard would do one of those nifty commentary features about just that one panel, allowing Johns and Jimenez to go into detail about what they were feeling when they took Pantha's head off.

But as far as symbols epitomizing the majesty and shock that the DCU is capable of, I can't think of a better one (though the Black Adam eye gouge is a close second). I'm in.

Dude! You have the real-life Power Girl directly on the left, and you think PANTHA'S HEAD is the living symbol of the DCU?!

Am I a heretic?

Sadly, I cannot claim heritage in the LORHP, as our little blog drunkenly stumbles across the line of geekery between DC and Marvel regularly.

I will say, however, that that image is one hella cool image.

Our secret codeword should be "fwmp!"
chrisM