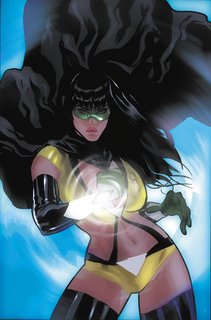 This is, in fact, the cover for Uncle Sam and the Freedom Fighters #4 but dammit for some reason, this is the cover I decided to use!

Hey, kids! Did you know that I do comic reviews for CHUD? Yeah. Sometimes, I forget that I still do that, too.

This week, I reviewed the upcoming Uncle Sam and the Freedom Fighters #1 (Third review down.) So, as usual, here's the first paragraph, submitted for your approval...

“Can you imagine living under the totalitarian regime of face-hugging starfish parasites from Planet Wherever? No, they can’t, because I’m out there putting my life on the line to keep this country and this world safe.”— Phantom Lady

“When Lilliput was on fire, Gulliver urinated on the palace, to save the people... Like the Lilliputians, you want safety and prosperity without sacrifice.” --- Father Time

...and with those lines of dialogue Uncle Sam and The Freedom Fighters #1 has eclipsed, in my mind, Marvel’s Civil War as this summer’s best comic book you’ll read about superhero legislation.

You can read the rest of this review and other fine comic reviews at CHUD: Thor's Comic Column!
# posted by Devon Sanders @ 4:23 AM

Comments:
"... Like the Lilliputians, you want safety and prosperity without sacrifice.”

Ah yes, the ol' "Those who would sacrifice a little freedom for a little safety" line.

That's actually quite funny in a political context, asking a politician "If you were a giant, would you piss on all of us to put out a fire?" ^__^

The only way this metaphor works in the context of the current international situation is if Gullivar had missed the fire entirely, pretended he had put it out, and was attended by followers who shouted treason at everyone who said, "We're still on fire! AND WE'VE BEEN PISSED ON!"