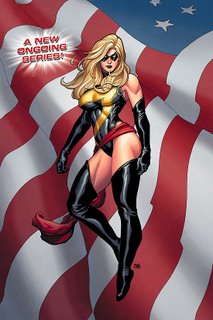 Lately, I've been reading the comic book adventures of a blonde, buxom, superpowered heroine. She also happens to have a connection to one of comics' most revered superheroes. She's also been a member in good standing of one of comics' oldest and most powerful superteams.

After the events of a universe shattering crisis, she's finally realized her place in the world and set out on a path to make a name for herself.

Comments:
I was shocked, Shocked I say, when I discovered that this was a good book. Even with the Brood, it still manages to be good.

After they rejected my name for their letter column, I dropped this book like a bad habit. Yup, I'm THAT much of a bitch...

Who is she? What does she do?

What happened to the sister with the happening fro?

Scipio I think the character (Monica Rambeau) you're referring to calls herself Photon now. Before that she was Captain Marvel, making her one of four(?) people in the Marvel Universe to have used that name at some point.

As for Ms. Marvel, she's Carol Danvers, formerly of the air force I believe. She's got flight, super-strength, energy absorption powers. Rouge absorbed her powers and personality back when she was still a villain, I can't remember how she came back from that. She's had a bout with alcoholism, which she seemed to oversome with a little support from Marvel's #1 drunkie, Tony Stark. She's been on the Avengers a couple of times, given birth to a child while in Limbo, the child growing up very quickly (like in days) to become Kang(?). I'm not really very clear on that history, but I remember there was a child and depowering at some point. And she developed new powers and a new look at some point, and began calling herself Binary. Then she reverted to how she looked before, and started calling herself Warbird, and now she's gone back to Ms. Marvel.

Personally, I prefer "Warbird" to "Ms. Marvel" on the grounds that too damn many characters have the word "marvel" in their codenames, at DC and Marvel both.

And I would be quite happy if DC decided to forget about Supergirl, rename the book Power Girl and give me another book like this to purchase.

She's a great character and I enjoyed the first few issues.

Unfortunately, Carol will soon be embroiled in the Civil War and saddled with Arana as a sidekick.

That's like sticking Power Girl with the new Supergirl.

'Froton! I want to see more of her.

Depowering? Limbo child? That does sound like the old Power Girl.

Monica actually had her Photon name stolen by Genis-vell now to so I'm guessing she's back to Captain Marvel unless Genis's sister took it.

Also "Froton" as we'll call her is in Nextwave being bad ass and constantly telling people she led the avengers.

Ms. Marvel however is awesome. I'm sure Devon appreciates the seeming romance and intrest between her and Dr. Strange.

I would say that Devon would be far more interested in a seeming interest in a relationship between Ms. Marvel and Power Girl...I know I would!

"Monica actually had her Photon name stolen by Genis-vell now to so I'm guessing she's back to Captain Marvel unless Genis's sister took it."

Wasn't that the second time he took the name she was already using?

Anyway, she's just going as Monica Rambeau over in NextWave at the moment. Not sure if that's "in continuity," though. It's light-hearted entertainment, so you figure The Powers That Be will terminate it with extreme prejudice the first chance they get, Warren Ellis or not. Marvel & DC seem to have that in common lately.

I was just thinking about how much alike Carol and Karen are. The drawings are even looking more similar, now that Ms. Marvel seems to have used her powers for a cosmic boob job. All she needs now is the window...

As far as the book, I'm loving it. I hope they maintain it well through civil war, and don't let it peter out in politics.

Monica is not using a codename at this time, but for a truly 'fro-licious babe, you MUST read the exploits of Misty Knight in Daughters of the Dragon and the soon to be released Heroes for Hire. Misty ROCKS!!! She's bad-ass.

Hot damn! Nothing really to add to this conversation. Just wanted to post while displaying my new website.
I do like Ms. Marvel, and Genis's sister is the new Captain Marvel.

I so called it.