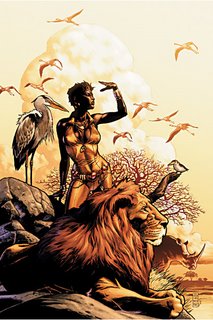 Monday afternoon, I found myself, once again, in the company of friends playing a game of Heroclix. Woozy from Monday's revelation of Brad's Justice League of America line-up, I decided to field a team comprised of a rookie Black Lightning, a veteran Vixen, a veteran Red Tornado, an experienced Hal Jordan, an experienced Black Canary, a veteran Hawkgirl and a veteran Arsenal.

This team comes out to a perfect 400 points.

Scip quaked and hemmed and hawed at the assembled might of The Justice League and proceeded to hide in a corner as Hal Jordan took out Scip's monkey (Gorilla Grodd) without moving one single square.

That's when things got weird. A Guy Named Glen's team was full of healers. This dark, dark team started to help one another, heal one another. It was oddly beautiful. Before I knew what had happened, Black Lightning was dead. (A cliche if I ever saw one.)

Next AGNG's team swarmed upon The JLofA's womenfolk. Next to fall was Black Canary and then Vixen. Hal tried to help but he hurt his hair or as you may call it "rolling double ones." Then, Scip and AMNG teamed up on Hal (Make your own joke.) and proceeded to kill him, slowly. Hawkgirl quickly retreated and was soon overtaken by Captain Boomerang. AMNG's "Gloom Patrol" rapidly collected the remnants of Scip's folly.

The League was left with one man standing: The Red Tornado!

I forfeited as even The Red Tornado couldn't single-handedly stand against the assembled might of untouched an Doc Mid-Nite, Raven & Obsidian and a fully healed Batman.

So, how does this game of Heroclix bode well for Brad Meltzer's Justice League of America?

It was just a game of Heroclix, after all.

Comments:
I suspect the dark thick cloud of emo gloom hanging over my team's heads worked some kind of dark, eldritch mojo on the dice that night. Way too many snake eyes being rolled, as I recall.

The Meltzer League should be fine, as long as their adventures keep them away from any similar concentrations of negative energy.

If, however, the world should need to be saved from, say, an Elliot Smith show, or if an American Music Club set is threatening downtown Metropolis? Yeah, we're all doomed.

Like some people during the dramatic comic book reading contest-You wuz robbed!

Plus, dontcha just hate it when they all gang up on you?

I think this game bodes well because Meltzer included the Big Three on his squad. I'm sure just taking Batman away from the "Dark Cloud Crew" (Sorry, best I could come up with) and adding him to yours (point considerations aside), would have shifted things a bit.

And besides, now that Bart has started running around in a Flash costume, all the Rouges are going to be too busy trying to kill him to trouble the JLA, so don't sweat them.