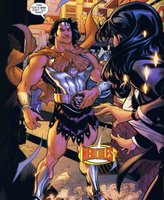 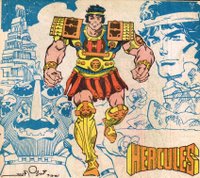 Logos don't lie.
Ah, "New Earth..." What's not to love about you? You erase Batman "Hush" inspired rememberances from The Riddler's mind. You restore Wonder Woman as a fully-founding member of The Justice League of America and then you give us fresh from ditching the shoulderpads and slaying The Nemedian Lion, Hercules Unbound? Yes, people, after a thirty-one year absence from the DC Universe proper, Hercules Unbound has returned, replacing wet-mop, serial rapist and Greek God Heracles.
The Hecules Unbound at the end of Wonder Woman #2 had a short-lived twelve issue series featuring beautiful interiors by future comics legends Jose Luis Garcia-Lopez and Walt Simonson with inks by EC Comics legend Wally Wood.

Hercules of Unbound fame existed in a post-apocalyptic world occupied by the likes of OMAC, Kamandi and The Atomic Knights. With OMAC appearing in his own comic and The Atomic Knights coming across The Command-D Bunker are we witnessing the re-weaving of Bronze Age threads or does Wonder Woman writer Alan Heinberg just think 1975's Hercules Unbound just kicked ass?

Also, your intrepid Devon wrote a review of Wonder Woman #2 over at CHUD: Thor's Comic Column. If you somehow could not make up your mind about your feelings on Wonder Woman #2, feel free to let my review act as your opinion.

Comments:
It'd be greatif they could work Kamandi back into the New Earth universe. Talking animal soldiers rule!

By the way, was that a "Nutty Professor" reference or am I just reading too much into it? The image of Grandma Klump clapping her hands is making me lightheaded for some reason.

So the Riddler doesn't remember Batman is Bruce anymore?

Who wants to bet that was a nice little slap to Jeph Loeb for going back to Marvel? Man, why is it that EIC's use continuity as their foam bats to work their grudges out with? :)

I don't need anybody to tell me how to feel about Wonder Woman #2. I think it kicked ass, even without knowing diddly poo-poo about Hercules Unbound.

I am totally not enthused for All-Star Wonder Woman, because I think the regular Wonder Woman is an All-Star quality book, only set within continuity. If only they could speed up the printing schedule.

Oh, and what's not to love about New Earth? Well, you've got Bart Allen as the Flash (stopped buying that), Hawkman as, well, I dunno what the heck's up with him, but he's no longer in his own book (stopped buying that), and a pissed-off J'onn J'onzz not in the Justice League and instead flying around in a goofy outfit looking for his long-lost Martian kin, or something (didn't buy that).

Plus Supergirl making out with her adult cousin. Yeah, didn't love that either, and didn't buy that.

And no appearance of Flamebird. Don't love that, either, but I'd buy it if she was somewhere (and not making out with her cousin).

What? Isn't Hercules copyright of Marvel and Erik Larsen??? Hrmmph, I suppose they'll be introducing Thor next!!

I agree that what's happened to the Flash is ridiculous, but the good news, it can only get better.

I LIKED the new Martian Manhunter book. Its not a new idea, but I thought it was a decently written treatment. And as for his outfit, if it was good enough for the Justice Lord on JLU-then why not the real one? I think his new angled head takes a little getting used to-but it doesn't bug me much.

Plus, uh..Supergirl wasn't making out with her adult cousin, she was making out with Ultraman from Earth-3. I'm not saying Supergirl the book is any good-but it doesn't suck nearly as much as the Flash does...

Personally, I agree with Devon-the New Earth has a lot of good features to it. Lots of opportunities for some interesting stories...

Plus, All-Star Wonder Woman will Rule!

Haole, is Supergirl making out with a cousin simulacrum a product of new Earth, or something older and deeper.

And since Ultraman is, I believe, Clark Kent (just a human who went into space rather and Kryptonian who came to earth), that still makes it pretty not-OK to me. I mean, if I met my cousin Laura, who's an attractive woman who has done some modeling, only this Laura was from another universe, I still wouldn't feel OK with copping her butt. Especially if she was, like, 15 or whatever.

And yes, I now feel like the biggest nerd in this or any universe for talking about a hypothetical cousin from another dimension. Thank you, Devon, for this forum. I need to go find a gas oven now.

I still wouldn't feel OK with copping her butt

I didn't say I was okay with it. I just meant it wasn't necessarily New Earth's fault Supergirl's got issues.

So you're sure that's Hercules from Hercules Unbound? I hadn't caught the distinction in the names, but you're right.....the icky rapist was known as HERAcles...now we've got HERcules. Hmm.....

I'd also like to know who the fetching young woman is wearing the Power Girl costume on your main page. Know her....or did you just run across the photo somewhere? Inquiring minds want to know!

There would be more cause to celebrate if that weren't obviously Dr. Psycho.

Even if it is Psycho, SO WHAT!

The underlying point of the post is that DC, of late, is embracing its past, beautiful & ugly. I love that. The chance to go, "I know that guy!" makes comics reading just that much more fun.

I found that thing on this website called Mandisteele.com.

I haven't looking at it in over a year but the last time I visited it it featured the aforementioned Mandi in a Power Girl outfit fighting a woman in a Supergirl outfit.

Nothing wrong with that.

Actually, Karl Kesel placed all of the old Kamandi cast (excluding Kamandi and the 3 Mutant Stooges) into the present day DCU years ago, in the pages of Superboy.

Except now they're all on a "lost" Pacific island, part of a Dr. Moreau-esque experiment gone wrong...

Hercules took place sometime after the original OMAC. There was an issue where Herc and the Atomic Knights found the water from the Great Lakes all compressed into a cube, courtesy of Dr. Skuba from a story in OMAC. Kamandi was the grandson of OMAC.

The rough timeline of that was OMAC was in the near future after corporations took over the world. Then, in 1986, World War 3 accidentally started (oops!), which released Hercules from imprisonment. After a generation, animals became sentient at the expense of humans.

That was later revealed to be an alternate timeline and not the one in which the Legion of Super-Heroes was in the future.

Heracles... interesting guy... original outfit... lion skin, big club and nothing else. Took a vacation from heroing by hiding in a Greek harem: he was refining his embroidery technique. Cute frilly gown nicely filled out by those broad broad shoulders. The harem ladies looked to be pretty happy too. There's no accounting for tastes.

Then it was off for more adventuring with Jason and Argonauts. "Hi there sailor, looking for a good time?"

Speaking of taste, imagine my surprise, as a young man visiting the Metropolitan Museum of Art ( back when NYC was FUN!), when I stumbled upon a Hellenistic (<<< showing off) statue of a middle-age Heracles (the slight beer belly was dead giveaway: gotta love those bears),lion skin and all, leaning against a doorjamb, emptying, very nonchalantly, his heroic bladder: different standards in those days. Now we use alleys.

Meanwhile, back a few thousand years, in oldtime Sumer, recounted in a recent translation of the Epic of Gilgamesh, as our intrepid heroes Gilgamesh and Enikdu, the Wild Man, begin their adventure to kill a big bad demon (a favorite of the gods, as it turns out), our Mighty Man's mother, a Goddess with an unpronounceable Sumerian name, decides that Enkidu is ONLY suitable mate for Gilgamesh and proceeds to marry them with great pomp and circumstance. After the ceremonies, our two husbands(?)continue their adventure, kill the demon, outrage the Gods, have further adventures, outrage the Gods even more, and have a long,happy heroic marriage. Finally, Enkidu, being mortal, dies leaving Gilgamesh heart-broken and grieving.

The translator of the marriage passage says, basically, "and isn't this section interesting?".

Take that Chuck Dixon. Considering all the decapitation and dismemberment in your funnybooks, what kind of kids are you raising, anyway?

Then there's the cool straight guys: beer drinking, bs-ing, belching (AND NO ATTITUDE!)men, we all love so much.

Ted Grant, my next to favorite straight guy, you hunk, you party animal, you stud, will you please re-design your hood? Bobcats and lynxes have straight perky ears ( see illustration - http://www.merriam-webster.com/mw/art/lynx.htm)and you are a straight perky man (cool moves in the final issue of JSA, btw). Lose the "please break my neck sideburns". Technically, these are known as "beards" and lie close to a bobcat's jaw. Maybe they can be redone as a chin guard or some such thing. (no, this ain't a Queer Eye moment. It's a take out the inner fanboy for a good airing moment - and brush those damn teeth!).

Selina's baby is going to grow into one perky kid, you betcha. I can't wait. Ted, you old tomcat, how many litters did you sire, anyway.

And... there's my absolute favorite straight guy, Lobo... my dark other, my main man, my deepest alienated fantasy, my I know you're big-time trouble, way outa my league, Superman tussling, planet busting stud. I WANT YOU!

We grow older but no wiser... where's the fun in that?

DeVon, in a future episode of New Earth theater, maybe Gilgamesh, Heracles, the current Hawkman, and the bare chested "70's lovegod" Batman, and Mike Grell's irascible, loveable, frequently nude Green Arrow, could go out for a night on the town, drinking too much beer, swapping lies, belching, and charming the ladies.

Being an irascible, loveable guy yourself, I think you're up to it. Being hyper-caffeinated at four in the morning never hurts either.