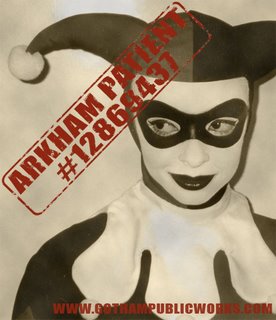 A strong female lead, Terry Dodson on art, a writer willing to try new things, you'd think that would be enough to sell a comic, huh?

What comic do I speak of? The mercifully defunct DC series, Harley Quinn.

It started out promising: Harley, fresh from emancipating herself from her boyfriend, The Joker, puts together her own group, The Quintets (So far, so good.) liberates her "babies" (Her two hyenas) and then proceeds to find her own way in The DC Universe. Sounds good, yes?

Throw in Big Barda acting as an agent of Oracle, a slumber party featuring Harley's gal-pal, Poison Ivy, Catwoman and a drunken Jewelee of Punch & Jewelee fame and our asses should have fallen off from laughing so hard. Not so.

What comics got was a calculating, deceitful woman who truly, truly had no need for her "Mr. J." or much less anyone else for that matter, as she proceeded to kill of the henchmen, one-by-one, who'd gotten close to her.

That's when it dawned on me why I didn't care for this Harley.

Series writer Karl Kesel hardened her heart and had her become her man. He turned her into The Joker.

Gone was the Harley of The Batman: The Animated Series, the one who delighted in the sheer randomness of her and The Joker's crimes. The Harley of the B:TAS adored her man and we, the watchers, absolutely loved her & hated her for it. We, as sane folk, could never forgive her for constantly going back to a man who hated her but I think we all secretly marveled at how hard this character could love. Absolutely. Unconditionally. She was willing to give her man all the things, he in his crazy heart wouldn't willingly give her. Harley Quinn was the embodiment of unconditional (mad) love. Harley had hope. Despite myself and knowing how wrong it is, I loved that about her.

By hardening her heart within the comics page, that which made her unique was taken away and that just may be the saddest part of Harley's all-too-brief comic book life.

Comments:
Its always disappointing to see a writer completely miss the mark with what makes a particular character appealing.

and with art by Terry Dodson no less...that would have been neat to have seen.

Karl Kessel got me back into Marvel comics with Daredevil (alongside current Conan penciller Cary Nord), and Harley was one of my favorite characters on the Animated Series, which I loved.

But man, you nailed it: That series was godawful. And it really didn't get any better when AJ Lieberman came on and tried to make it a dark crime drama either. Yeesh.

I think your point is well taken, BUT... Isn't Harley a perfect character to reclaim in the Secret Six. Imagine Herley, having been thrown out of the Villains United (Joker having been rejected himself) trying to make her way. Imagine her comments about Catman, Dedshot and the lesbian couple. It would be perfect. Even a guest spot in Birds of Prey. C'mon Gail, Harley needs you!

Trust me, Rich, NO ONE would like to see Harley in Gail Simone's more-than-capable hands than myself.