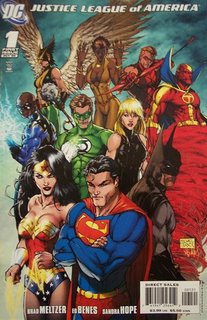 One? It has The Big Three of Superman, Batman & Wonder Woman. You can't have a Justice League of America without them. You can have one without The Martian Manhunter though.

Two? Knowing Brad Meltzer who is in love with all things 70's DC, with the inclusion of Black Lightning (Black Vulcan), he gets just that much closer to The Super Friends roster he always wanted to see.

Three? With the inclusion of Hawkgirl & Vixen, we get just that much closer to a Justice League Unlimited roster.

Four? A sixty-forty split of men to women. There should be no reason for anyone to find fault with that.

Five? Yeah, there are two people who look like me on the team. Yeah, I'm talking about Black Lightning... and Red Tornado. Bald guys.

Comments:
I'd find fault with it if I thought it had anything to do with Aquaman being not on the team. But thats not anyone's fault except a certain few...

Isn't it more of 4 to 5 gender split, depending how human the Red Tornado's feeling?

Meltzer also said there'd be an 11th joining at the end of the Red Tornado storyline.

Zatanna? Bringing gender-equality to the league?

I was kind of hoping to see Firestorm.

Will someone tell Jefferson Pierce that Static wants his old costume back?

Well, now I'm all sorts of confused because on DC's website they have the cover of Justice League of America #2, and on it, their archer has a bright green bow with a bright green arrow, but Roy rocks that red nonsense... are we sure this cover is legit?

I realize that in some ways Red Tornado compensates..but I always feel that not having a Flash in the Justice League is like the Avengers not having the Vision...Otherwise its a nice lineup. Looks like "Arsenal" is doing is Red Arrow bit from Kingdom Come..Ross' designs seem to be creeping in all over the place.
Looks interesting...looking forward to the book this week..
Chris M.

I know you and Scipio have love for the Meltzer, but obvious biases aside :), I agree that this's a more interesting lineup than I was expecting.

They're not as iconic as the Morrisonian "Big Seven," but I like the mix of the classic (The Trinity), the Satellite (Hal, Dinah, Reddy), and the unexpected (BL, Vixen, Hawkgirl, and especially Roy).

I'm particularly pleased at Roy getting the duke, as it's a nice little rejoinder to Didio's belief that the "Titan Generation" has no place in the DCU. I look forward to finding out what made him go back to his Red Arrow togs as well, besides Alex Ross leaning over his shoulder. :)

I'll be severely disappointed if this turns out to be a fakeout of some kind.

Another thing that I like about the lineup is that there's a bunch of thinkers on the team..in addition to Batman, with Black Lightning, Black Canary and conceivably Red Arrow and Vixen. Its a balanced team..some power, some versatility, some thinkers....

btw..I don't think the red-green arrow thing is a big deal. The team looks real..Vixen is on the cover of the November issue.

I was irritated. I don't like Red Tornado, and I was hoping for John rather than Hal.

What about J'onn J'onzz? He's bald, too. Where's the love for the Martian Manhunter?

Yeah yeah, Red Tornado is the J'onn equivalent for a younger generation and all that. Still, I say "Bah!" especially to that Turner cover art.

As much as I don't like the art, and as much as I wanted John Stewart instead of Hal Jordan, I think there's a lot of potential in this group. Meltzer's got a lot of room to move with this lineup, so I'm tentatively optimistic.

Doc -- *Nod* It's at least worth a storyline to see where he's going.

I like the fact that it looks like Roy is about to shoot Hal in the back. Clearly, he's adopted the Bush Administration's preemptive strike philosophy. "Hal's gone psycho in a couple of timelines now. Let's just get this over with."

Makes me all warm and fuzzy.

I'm kind of disappointed by this team. With the exception of the "oomph" that the Big Three bring to the mix, everyone else garners a "meh" at best.

It's like one big crazy mashup that's supposedly made alright because Superman and Batman came to the party. I like that Vixen's star rose during JLU and I like the fact that Roy has "graduated", but the team itself....meh.

I can get over it being one of the rare incarnations to not have J'onn. I don't even like J'onn. But there MUST be a Flash. It's like the 11th Commandment: Thou shalt have a speedster. I mean, they obeyed the madatory GL rule. You can't swing a dead cat in the DCU without hitting Hal Jordan, and they went and put him in my face MORE.

And why does Black Lightning look to be the same age as his own daughter? Why not just put him on the Outsiders with his old pal Katana?

For now, I'm holding out for this myterious 11th member. Maybe that wild card will be the one that makes me fall in love with the team (!ESAELP ?enoyna, stenhsif)

"I can get over it being one of the rare incarnations to not have J'onn."

J'onn was gone from the JLA for a good 10-20 years while he was building "New Mars". I don't think he returned to membership until the Crisis/Detroit era. He did show up for occasional guest visits (e.g.JLA 200).

I was disappointed by the inclusion of the Red Tornado and would have much preferred the Flash, any Flash. Every major storyline involving RT seems to involve him being blown up. Why?