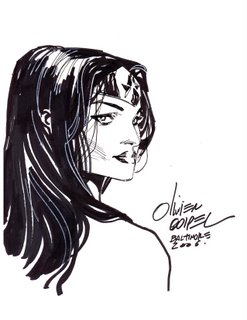 Back from Baltimore Comicon and I think I just may have had the best time I'd ever had there. The highlights...

Standing in line for a sketch from Mike Wieringo (who, by the way, is built like a strong safety), I plop down a copy of 1st Issue Special #4. He picks it up, almost incredulously, saying, "Lady Cop? DC published this?!?" It was the sound of nigh-perfect incredulity. I went on to explain Liza Warner, Lady Cop's origin, her quest to find The Killer In Boots, her quest to find a Latin girl with VD. I believe I saw bits of his brain bleed from his mouth. The sketch, a thing of beauty, by the way.

J.G. Jones was doing a Batgirl sketch near convention's end and it was gorgeous! Believe it or not, he said it was the first time he'd ever drawn her. With the upcoming release of All-Star Batgirl, the character's in good, good hands.

I was within earshot of artist Phil Noto and heard him say that we could defintely look for more Jonah Hex work from him in the future.

Stopped by the DC Comics booth and a friend of mine showed me an advance copy of Vertigo's upcomig Pride of Baghdad. It's beautifully, beautifully drawn and just may be the best thing Brian K. Vaughan has written. The book's ending still haunts me a day later.

Bill Willingham was there and was incredibly nice. I got him to do a sketch of Fables' Snow White. We talked about Fables, Robin, Shadowpact and The Elementals. For those who don't know, Willingham created the previously mentioned Elementals, an independent superhero comic, in the mid-eighties. He joked it took him only twenty years to become an overnight sensation.

Newly DC exclusive Jimmy Palmiotti was there, as well. I noted that, lately, I'd seen less inking work from him. He said he's scaling back on the inking to focus work on his writing. He'll still be inking Amanda Conner's Terra mini-series. I asked him if we'd ever see charcater like Ra's al Ghul or Vandal Savage pop up in Jonah Hex and he says DC would rather that he not use too many "DC Universe" characters. He did tell me of one story he'd proposed that DC rejected: Jonah rides into a new town and meets up with a woman whose husband blames her for not being able to conceive a male heir (her husband actually had the problem), Jonah steps in and solves the problem, giving the fella a male heir. The family eventually moved on, relocating to a new city. The family's last name?

As in Harvey (Two-Face) Dent.

Next, I stood in line, shaking in anticipation. He was here. And he was singing to me. Yes, Howard Chaykin sang me a song and I admit I was a bit put-off and flattered at the same time. Did Howard not know that he didn't have to try so hard? Howard, you had me at The Galactic Space Vagina. I was yours all along.

Thanks to Baltimore Comicon creator and coordinator Marc Nathan for consistently putting together a well-run and more importantly, fun convention.

Comments:
The Jonah Hex/Dent storyline is even more ironic since opposite sides of their faces are scarred.

Ooooh! The story could be like a cool time travel issue along th elines of those Black/White Star Trek guys.

I can't wait to hear what THE GODDAMN JON HEX thinks of that Dent/Hex idea. Shame on D.C. for not getting on that train. :)