There's just something very primal about this character. In his origins, he encapsulates the concept of "nature vs. nuture." In his abilities, he embodies risks inherent in "flight or fight."

He's never truly had a "definitive" story, his Justice League tenure didn't exactly set the world on fire, he has a dubious Apokalyptan origin, he's currently M.I.A. Despite all of this, his is one name that almost always comes up when asked about people's favorite comic book characters.

In trying to figure out why this character works, I find the one thing that makes him soar.

Despite his life, literally, being a circus, despite being born "Scott Free," he's found a home. He's found his anchor. He's found that one thing that will always lead him back home and it's his woman. 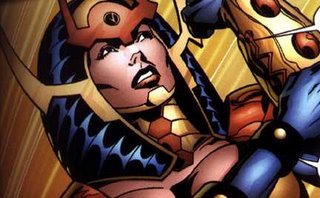 Trust me, I'm no romantic but there's just something so damned cool, knowing that no matter where he is, in a universe as big as DC's, no matter what the odds, Mr. Miracle's main reason isn't simply to defy the locks someone's put upon him but to get back to the one he loves. The threat of death means nothing to him now. The thought of life with Barda Free means everything to him. He needs her. She needs him. They need each other. Death can't keep these two apart. She keeps his compass true. She is what guides him home. This is evident in their every appearance together or apart.

More so than in any one Superman/Lois appearance.

More so than in any one Black Panther/Storm appearance.

More so than in any fifty Ralph & Sue Dibny appearance.

If The Frees were to ever truly be apart, that would be one of comics' greatest tragedies. All love within the DCU would die, for me, right then and there.

Did I mention this is just one of the reasons I'm not buying Ralph Dibny's over-the-top grief in 52?

Comments:
One of my favourite posts since I discovered the comics blogohedron is this one.

wow...! and you' re saying that you are not a romantic...? I certainly am not and this moved me... the DC tapestry would indeed sorely lack in (sentimental) pathos if these two disappeared from it... maybe it's the fact that she's threatening to kick his (or Oberon'e) ass every time he's not "behaving"... that is such a turn on! or each time she goes all-Omac on Darkseid's dogz, yo! ah, Barda...! cheers...

I have to agree with you on this one.

Any idea who Little Barda is? A de-aged Barda or the daughter of Scott and Barda?

Yeah, I could see that.
I still say Ralph's over-the-top grief is more a matter of DC not letting him move on and heal from the loss but constantly bring it it up like a pick at a scab, but... that's me.

Yeah- the end of IDENTITY CRISIS actually seemed to have Ralph coping, but then they plunge him back into angst, and it seems like it'll be Week 52 before that ever gets resolved.

Anyhoo, Kirby apparently based Barda on his wife Roz, so that may explain the strength of their connection- he wrote their relationship with a reality to it, and other writers have been able to hang on to that. Barda is Mr. Miracle's rock- she is always strong and always there.

I'd say it definitely is the strongest portrait of pure love I've seen in the supers comics. I'd put Ralph and Sue second, and I like Peter and MJ and Reed and Sue and so on, but Scott and Barda are perfect.

What about Adam Strange and Alanna?

There is that beautiful moment in the englehart/michael golden Mr. Miracle where scott is saying about his new role as savior"... and I'll do this, and then this and then..." and barda decks him. and reminds him that even saviors need to not neglect their wives.