It was another uneventful day in the comic book shop until an attractive blonde woman walked in and made things interesting.

It was a normal Thursday. The Wednesday regulars had been in 12 hours before, waving colored bits of paper, screaming unsophisticated things like "Detective Chimp" at the top of their lungs. Words that to the outside world sounded like an assignment for the Navajo but to ears attuned to the four-colour, it all resounded with knowing.

Into this environment walks a young woman, confident and striking. Y'know, comic book pretty. No doubt, she wouldn't have looked out of place on a Romita, Sr. page. She asks questions, questions that to these ears sound quite foreign. "Do you have any Firestorm toys or statues?" Sadly, I tell her that, as of yet, there is nothing on the horizon. "Awww, my father loves Firestorm. How about Spider-Man?" "Spider-Man I can help you with you."

Ten minutes later, she leaves, statue in bag. "By the way," I say to her, "please, tell your father that if he never does anything else, there's a man here in D.C. that worships the ground he walks on."

"Why? What because of Firestorm?" 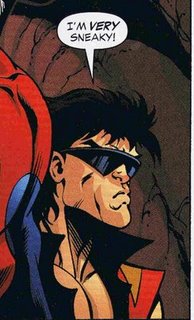 Ladies and gentlemen... the power of Vibe.

...and then, we hopped onto a couple of stolen Pegasus' and went to my underwater lair.

New ending courtesy of Dwayne "the canoe guy."
# posted by Devon Sanders @ 9:58 AM

Comments:
Since I'm totally clueless, is this Gerry Conway's daughter you're talking about?

But...but...there's a Firestorm figure from DC Direct a couple of years ago...it's a good fig, too...but why would Devon lie? After all, Devon erreth not. So clearly, there's something more sinister...something deeper...afoot. Hmmmm.

Crap. Superboy punched my action figures out of continuity, too? That jerk.

I really do think that I've seen a black Firestorm statue online at some point... Hmmm.

That Firestorm, I believe, is no longer stocked by DC Direct.

Okay...I had re-read it a few times to get it..but Wow! Gerry Conway's daughter?? The legend! Wow!

I thought you were gonna say, "Because he helped make you."

And then you both would have jumped onto a couple of stolen Pegasus's and flown away to your underwater lair.

There's going to be a Jason Rusch Firestorm figure in May 2007. I can put up a link to a pic if that's acceptable.

That was the flyest story ending I've ever seen.

In addition to having a sudden craving for Jell-O, I am feeling a bit distressed at what's happening to Donna Troy's arm in that second pic.

I'm with Dwayne: I totally thought you had one of the most awesome pick-up-lines ever going on there...