Yesterday, a customer in my comic shop looked up in complete shock. Was the ceiling caving in? Had we finally installed from the ceiling that Purple Death Ray I'd been wanting?

No, it was something much more shocking than "Purple Death Ray" goodness. This customer looked up and saw my choice for "Pick Of The Week."

Was it Justice League of America #2? No. As much as I love Brad, we're three issues in and what does he have Superman, Wonder Woman & Batman doing? Still sitting at a table.

Was it Secret Six #4? No, but it was close. Did you read that ending? I see butt naked conflict in this comic's future. 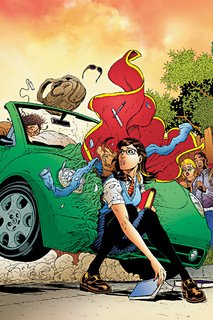 Supergirl #10.
No greater sea change in quality can be found in one single issue this month.

So what made me love all over this issue? Could it be that it has something for savvy Supergirl fans, old & new? Something "old" like a little orange kitty...?

...and something "new" like Kitty's reaction to a certain teenaged girl.

So much for a Kara/Streaky reunion issue.
Could it have been Supergirl's attempt at finding a normal teenager's life in, of all things, HIGH SCHOOL?!? 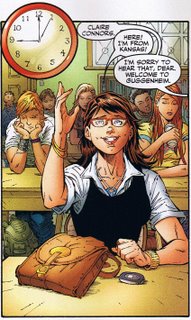 "Claire Conners." LOOOVE it.
Was it that Supergirl can go from doing something as "manly" as watching "Cool Hand Luke" to putting on make-up at a "girly" sleepover? 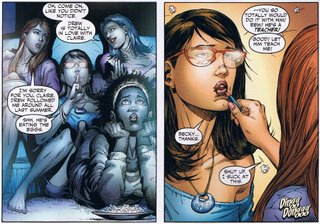 Or maybe it was the scene where Wonder Girl fights a French gorilla while Supergirl watches on? 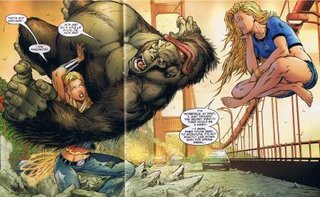 ...and is it me but is artist Ian Churchill portraying Supergirl as less anorexic and more, dare I say, athletic. My god, I do think Supergirl went and found that basket of sandwiches and the 15 lbs. dumbell I left on her doorstep!!!


No. It was the strength of writer Joe Kelly's writing. Kelly writes Supergirl exactly as she should be an alien, an outsider... a teenager. As conflicted as she is confident, all the things a teen can be. Supergirl #10 has an ending that, at once, shocks and doesn't, leaving me with a tremendous sense of opportunity lost. In short, Joe Kelly, with issue 10, has written a DC comic that I could *gasp* recommend to a teenaged girl.*

*Not that I'm a teenaged girl or anything.

DC, you just might have found your very own "Runaways."

Supergirl was such a crazy, stupid book what with her kissing putative cousins and such... up until the newest writer took over and pulled her out of Kandor.I was buying it for Churchill's pretty girl art..but gak..nothing was happening. There was more character development in the LSH book!!

Nice to hear its improved.Looking forward to buying it...

I agree. I didn't dislike the first arc, but I didn't really like it, either. Kelly's a wonderful writer and he gets Kara. The last two issues have been wonderful, just what I'd hoped the book would be. Kara is trying to find her own way, with all the teenaged angst that goes with being a teenager and being an alien, still learning the culture and rules.

I need to get my own review up.

I loved that issue. Joe Kelly turned the book around so quick it's insane. When Kara ended the fight with flick of her hand, it was great. I do hope Boomer stays a supporting character.
See, Devon. I can be unconfrontational. You bastard.

With so many guest apperances of Power Girl, are we sure the cat's a reference to Streaky?

Could it be in homage to the cat that was hanging around the JLE embassy that lashed out at everyone (except Power Girl).

Though if memory serves that cat may originally been an homage to "Bill the Cat" from Bloom County.

I can't believe that your review actually makes me want to pick up the book and read it.

wow, good review. I'll grab a copy next week when I go in and check it out.

Devon,
Imagery of you looking like a teenaged girl resembling Shirley Temple with locks and a froofy dress just jolted me out of the Monday blahs...

Yeah, I kind of want to read it, too. I love smart teen comics, and Teen Titans has lost its earlier "Man, we have to fight Brother Blood. I guess I'll have to do my homework in the T-Jet" quality.

I agree, we haven't seen how the Titans' lives outside the tower affects the group and vice versa in a while. Anyhoo, your review convinced me to pick up the comic, Devon, and I was not disappointed. Joe Kelly does a really nice job at depicting both the nicer and uglier aspects of high school (although in my case, some of the more immature stuff didn't make it past middle school). I agree that the art's improved, and Supergirl's conversations with Boomer and Wonder Girl were great. I just might stick around for next issue.

Supergirl #10 has an ending that, at once, shocks and doesn't, leaving me with a tremendous sense of opportunity lost.

I felt the same way about the ending. It was a strong ending and it made sense, but it's not the path writers usually take. Plus, like you said, one gets the feeling that Kelly's ending closed the doors of some story opportunities.

Glad I could do that for ya.