Superman Robot: Krypto. It's time for your feeding. (Places a dead yak in front of him)

Krypto (Head, tilted in that way that dogs do) : You're really not fooling anyone, you know.


Krypto (Taking a walk around The Fortress of Solitude) : Rao, it's quiet around here without that crazy "Skinny-Yellow-Pink-Thing" around.

(Why should a Superdog be color-blind?)
[Flashback]

Krypto (Looking totally apathetic) : Are you not sensing my displeasure, piglet? 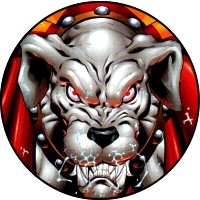 [Flashback ends]
Krypto: Maybe I could have been nicer to her. Then again, I am a dog. There really isn't a lot of middle ground for me to work with here... 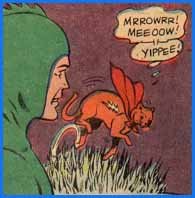 Skeets: (Hovering outside The Fortress) : He knows. 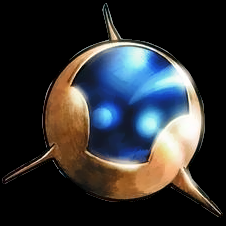 Comments:
I wonder he acts any differently towards Power Girl... say; PG doesn't go the Fortress much, does she? Maybe Krypto is the reason! He gets a TV show while she gets nothin'! Then again, when 'Smallville' is said and done, The CW can pick-up a Power Girl TV series! How's them apples, eh Superdog?

Skeets is a bastard.

Indeed! In fact, pre-Crisis Krypto wasn't colorblind when he was superpowered... at least, that's what it said in Elliot S! Maggin's "Starwinds Howl" story

Wayne: There goes our funding.

So... Krypto is another pre-crisis/crisis survivor...
As a young demon, just knee-high to a tyrannosaur, I adored Steaky and his(her?) cute li'l adventures. What can I say? I'm cat person... eh... demon... purrrr... oops, pardon... rrrrrrummmmble...

I think it is probably not "realistic" when a dog wears a cape, for example one time when I was a kid I tried to put a hat on our dog, he would not wear it! He would just shake until it came off. So I think Krypto super-dog would not wear a cape too! But also it is a comic situation probably.

I seem to recall there being a SuperMonkey and a SuperHorse, in addition to the SuperDog and SuperCat. My oh my. I sure would like to know what the writers were smoking back then.