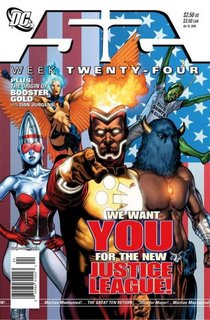 Good-bye, Super Chief. It was nice having you around. For that month. Yes, you wore a smelly ol' decapitated buffalo on your shoulders but hey, you pulled it off. And that's what made you so fabulously DC.

Now, I could go all Black Goliath-y and start complaining about how DC brought back a Native American character just to kill him but I won't. Somehow, with the likes of Grant Morrison, Mark Waid, Greg Rucka and Geoff Johns on board, the benefit of the doubt is a bit easier to give. Why? I truly believe it to somehow be part of some bigger plan. With those four, it just has to be.

So, to Super Chief, I bid thee a fond farewell... until like... next month.

Comments:
Haven't read this one yet, but I doubt I'll miss yet another check-list stereotypical Native American superhero. Black Condor is much better, but even he suffers from the "magical Indian" stereotype (because, ya know, there are no Indian scientists or lawyers who might get doused by radioactive chemicals or bitten by genetically-enhanced spiders)

as a Hispanic, I wish DC and Marvel will actually pay attention to how we speak a bit more. We all don't speak broken English or 'Spanglish', and it's not just Vibe anymore. The latest (and first) issue of the Dr. Strange mini had Arana refer to her ass as beacon. Maybe in Texas..

Anyhoo, here's hoping to see a Kitty Pryde holiday special, and if Marvel will buckle down and will dare to call it a "Christmas Special".

Well, they took out Standing Bear and they gave us Flying Stag. Plus, there was a Super-Chief One Year Later, so I think Standing Bear was a friggin' red herring put to give Ralph Dibny another cameo.

Hale: In the Western series Flying Stag was a damn good character, like seeing Max Mercury as Awehota/Windrunner (yes, I know Windrunner was a retcon, but the idea is that a superhero could be useful even in the 1880, if you took out the lab accident and bring on some meterorite fragment and a shaman). A western Iron Munro (or young Kal-L).

Trying to create a "newer" version of the same character putting him a leather jacket was lamer then the "Hex" series, where, at least, they tried to create a good atmosphere around Jonah.

"there was a Super-Chief One Year Later"

I was surprised that Super Chief wasn't made up just for the series. A quick look at Wikipdia reveals that he was a creation of Gardner Fox and Carmine Infantino! he teamed up with Bat Lash!

"In the Western series Flying Stag was a damn good character"

I'll have to take your word on that. Like the other anonymous, I didnn't even know "Super-Chief" was an old character until I did some research. If the earlier incarnation was less of a walking stereotype than this one, that's a good thing, but it doesn't say much for progress.

Weird how creators gain that trust. I know I hold off on skewering a Morrison or Johns book until the storyline ends too.

You're not seriously thinking of complaining that a character created for a series was killed in the very next issue of that series, are you? It's Super-Chief. Perspective, people.

Perspective? It's only Super-Chief? As someone who is approximately one-sixteenth Native American, I take offense, sir!

Really, though. I have the same feeling about Saganowahna... We may have seen the last of Jon Standing Bear, but *not* the last of Super-Chief.

I dislike the notion that a group of new superheroes can't hold down a Justice League. There's this notion at DC now that the JLA is not the JLA and can't possibly be competent unless it has any of the "iconic" characters in its ranks. It's sad to see grown men sucking up to fictional characters so much. Some people watched wayyyyy too many 'Super Friends' cartoons when they were kids.

...because god knows you can't just have an awful version of a superhero team for in-story reasons that make sense. >>

I mean, it's not like the whole series revolves around a bunch of low-tier heroes doing just fine without any of the big guys around to help them out.

Okay, turning off the sarcasm now. I love the fact that they introduced a fresh new legacy character, only to kill him off a month later. <3 comics.

Scipio: I just read on Wikipedia, But reading my past comics the "Dry Gulch" Super-Chief seems to be a nineties character. I'm wondering who did the mistake, Wikipedia or my memories.

Hale: True. He was on the par of Jonah Hex and the others, when the Western sagas weren't something to swept under the roof. With the recent reboot of Jonah Hex, we could expect somethin' about Flying Stag. Something more than a "manitou-like" apparition pissing the dead Standing Bear.

Oh, don't EVEN get me started. "Manitou" is Algonquin, not Mohawk (or whatever the hell of the Haudensaunee "Standing Bear" was supposed to be) and certainly not any made-up proto Apache whatever that "Manitou" Raven and Dawn were supposed to be. To give you the equivalent, it would be like having a Jewish character call himself "LOrd Vishnu." And "Saganowahna" is just gibberish; it doesn't mean "super chief" or anything else in any Haudensaunee language. I mean, seriously, Jurgens, Google much? Is it too much to ask that if you are going to use someone else's culture as "local color" you at least invest the tiniest bit of effort into research? Palmiotti did for Black Condor. GAH!
Whew, aren't you glad you didn't get me started?

Hale: I take the point, and remind to a reading of seanbaby site. Where, speaking of Chief Apache, the guy points out how we'll never have a "Minnesota President" between our heroes, neither a "Wisconsin Hockey Latte", but we had an "El Dorado" and a "Manitou Raven", and currently a "Super-Chief". And a KGBeast for a "red scare" villain.
But Saganowanha was an error of seventies...