Let me get this out of the way: I love Prez to death. He's just one of those characters that if DC Comics lost their minds and allowed it, I'd write him for 34 cents and a handful of Jolly Ranchers. So imagine my surprise that while attending last month's Baltimore Comicon I came across...

The Greatest Comic Featuring Prez Of All Time! 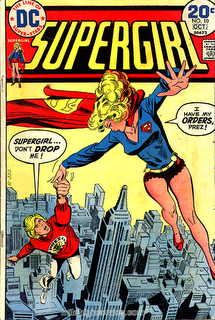 Was illustrating the tallest phallus you could think of totally necessary in pointing out Supergirl's ample bosom? Yes!!!

This comic's cover also has a blonde in satin hip-hugger hot pants and a cape. You need nothing more.

Go away. Leave me.
Oh, you want more? I'll give you more!
All that you can handle.
Prez Rickard, Teen President is out meeting the people at a supermarket and promising to keep the price of a hot dog low.

Can you handle Vandyre University student a hip-huggers wearing Linda Lee sneaking out of the TV room...

...to change into hot-pants wearing Supergirl? Can ya? What could have possibly have caused Supergirl to don the hot-pants of justice? 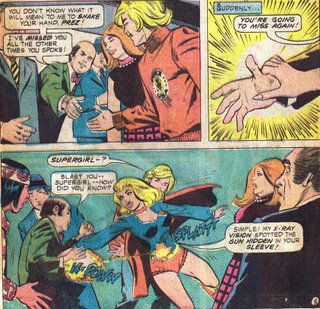 Why, Prez, of course.
Apparently, Supergirl's X-Ray Vision can see through a TV screen and not just see tubes and rat droppings but can also somehow, make out a gun hidden up a guy's sleeve who happens to be miles away. The redhead can hardly believe it her damned self, either. After Supergirl saves Prez from an assassin's bullet, you know what time it is... 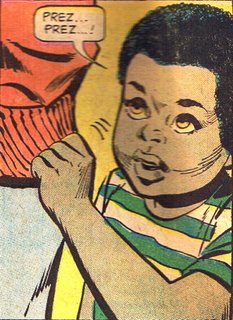 Look out, Prez. My cousin's trying to mug you! 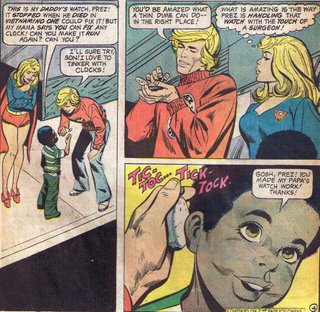 You know after reading this and First Issue Special #4 featuring Lady Cop, I am convinced that in the 70's the appearance of a small Black child was shorthand for "Dyno-mite! That White guy's alright." 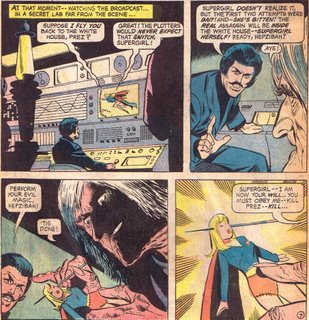 ...and hangs out with crusty old women. 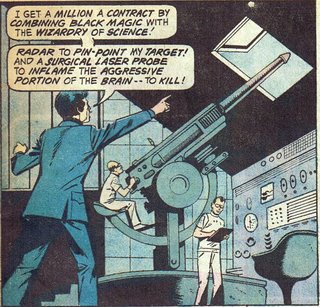 What follows next is, quite possibly, the flyest words ever to be written in the English language. 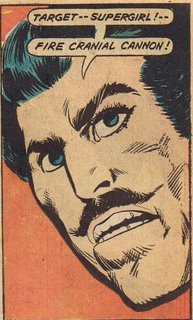 "Fire Cranial Cannon!"
Thank you, 1974 Cary Bates. For making my junk hard 32 years after the fact.
Elsewhere, a teenage girl drops a teenage boy from a great height. 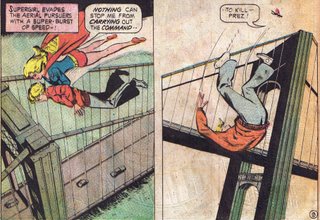 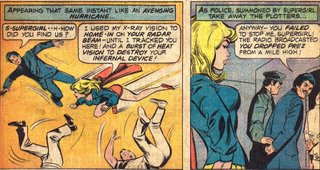 Y'know, if I knew that my freedom were coming to an end and knowing the last thing I was going to see for a while were a jail cell's bars, I think I'd the time out to look back, reflect on the past and cop one last peek at Supergirl's boobs on the way out, too.

So, how does Supergirl resolve nearly killng the President of The United States?

By saying, "Sike, America!"
Sounds like politics to me.

Comments:
Okay, in the "fire cranial cannon" panel, is it just me or is that a semi-young Ron Jeremy? Which, of course, makes the words take on a whole new and terrifying meaning...

Shouting "Fire Cranial Cannon!" is one of my new life-goal.

Supergirl keeps a plastic replica of Prez in her fortress...?

"Elsewhere, a teenage girl drops a teenage boy from a great height."

Why, it's enough to make you suspect that Cary Bates hates men!

I wish Prez will run for President in '08. He knows how to handle himself and when to let a lady take control.

Also, Prez Rickard is a uniter, not a divider.

Prez is handling that watch with such surgeon-like delicacy because he knows that kid's daddy's watch was in his ass all through Vietnam.

While Prez is certainly the man, what is the deal with Supergirl's shoes? They are like some kind of slippers with wing-like flaps. What is up with that? I mean, I can understand the decision to put the blonde girl in shorts and a plunging neckline, but slippers with wingflaps??? Who's idea was that???

Is this the only comic that placed Prez in the DC Universe proper?

I'm no big Sandman fan, but that issue with Prez (and Wildcat!) in it was one of the good ones.

Can't believe no one notice that guy prematurely shooting his gun all over Supergirl's stomach. Surrounded by people. In public.

Is there ANYTHING that X-ray vision CAN'T DO????

"Hotpants of Justice!"- coming to the CW this Fall!

Devon is sneaky... he thinks no one will notice that he did two straight posts about two different Supergirl #10's. It certainly provides an interesting view into the like and dislikes of comic readers then and now... in Joe Kelly's Supergirl #10, we get a pretty stock (and, by the way awesome) story about why being a normal everyday teenager is difficult. It's an issue predicated on empathy with the audience. Now, take the issue with Prez... this issue is predicated almost entirely on the fantasies of young people, to be Super and save the world, or to be President and solve all the world's problems, and to do so while not even 20! Is this contrast created because of the decline in the belief among young people that anything is possible and that compelling narrative for disillusioned generations relies on empathy with forebearance of the trials of everyday life? Or is it because storytellers have realized that audiences are infintely more reachable through story that tells us about what we are rathter than what we aren't? Or should I just shut the hell up and enjoy SG's hot pants?

Ha! You caught that, Mike!

Bow before the Super Camel Toe!

"Little black child" my eye. That's a grey in disguise.

Gee... we had Lex Luthor U.S. President, and now with the time-altering effects of Superboy Time Tantrums we cannot have a Prez again? It seems so unfair... at least Prez would never sneak around in green armor shouting some insane shit and kissing Waller while drugged to gills with space melted rocks, venom and stuff...

Know what I just realized? Prez wears a shirt with his name and emblem on it. He's a superhero.

I've seen this book exactly once, in a 3 for a dollar box in a used book store about, oh, 20 years ago. And you've officially made me want to go back in time and kick myself in the head for not buying it.

On an aside, thanks for pointing out the 70s Little Black Child. (There wasn't a small black child in Green Lantern/Green Arrow. I'm telling you, I'm not imagining it. They meant for Hal to be read as a racist idiot and Ollie to be a hypocritical blowhard.)

Yes, "fire cranial cannon" a great line, but so is your very own "evil wears a moustache."