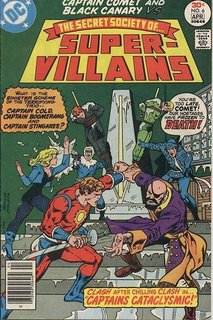 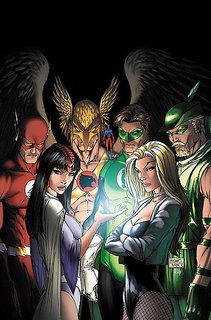 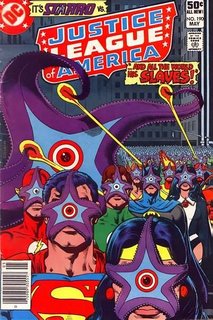 Comments:
Oh, absolutely. "In My Father's House" in Firestorm is a total valentine to one of Conway's big storylines.

I have no idea, not being a DC born and bred fanboy, but your post sure did make for interesting reading.

Devon, since your apparently pretty familiar with Herr Conway's writings, can you guess where JLA is going to go for the next nine issues? (Or at least speculate wildly, which is always a lot more fun?)

I hadn't made the connection, but I think you've hit on something. Maybe it's not intentional, but it sure could be subconscious on Brad's part.

I was a huge fan of the late 70's, early 80's JLA, much of which was Conway's. I liked most of what Conway did in that era, with one huge exception - his Legion from 1979-1981 was marked with stuff like "The Space Circus of Death" and "The Super-Spectacles Swipe".

Brilliant analysis, DVS! Have you sent it to Brad? I bet he doesn't realize... .

Of course, if we are living during Conway's Revenger, you know what becomes inevitable.

Probably a Mexican-American girl rather than a Puerto Rican boy, but still inevitable.

You really nailed it. Every fanboy has his own personal Golden Age, and it will shade everything he writes. For me, it is the DC war comics of the 60's.
Sadly, DC's New Earth is returning their universe to the period when I thought DC started to really suck and pretty much gave up on most of their titles. The Conway-led Marvel-izing of DC didn't work for me at all. I hated Firestorm and Red Tornado. I hated that they were taking the fun out of my funny books.
It is really odd to me that DC is pitching us a kinder, gentler DC universe while returning to the era when their comics started turning dark and ugly.

good observations, I had to follow it up on my blog as well. Great comic detective!

A legacy hero version of Vibe would be the best thing ever.

Well, Commander Steel is getting a legacy in Justice Society of America #1.

I agree totally with you on this one! Perhaps Meltzer will continue to use conway as a reference point for future storylines, or maybe he'll start using other writers' toys, maybe gardner fox or morrison isn't too far way?

Well, those of you needing that Conway fix will see his executive-producing touch on "Law & Order: Criminal Intent", particularly the Vincent D'Onofrio episodes: