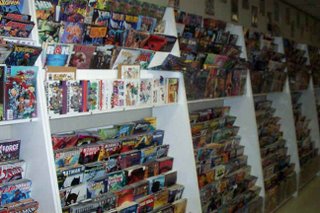 Nearly four years ago, a friend of mine by the name of Sean Fahey was writing a comics review column called "Thor's Comic Column" for the movie review site, CHUD. Sean, by himself, wrote every review...

...until, he made the mistake of asking me to write with him. The results of that unholy alliance led to this very blog.

Sean is very sorry for any hurt he's caused.

Four years later, "Thor's Comic Column" has grown into a mighty crew of nearly a dozen reviewers, myself still included.

Recently the decision was made to move "Thor's Comic Column" and try something different. The results?

Rack Raids.
With a dash of humor & a strong sense of comics history, I honestly believe the Rack Raid reviewers to be, hands down, the best anywhere. Blog. Comics news website. The best.

Period.
They're totally worth a look and hopefully, your time.
# posted by Devon Sanders @ 11:36 AM