What's Wrong With This Picture?

52 happens in real time, right? If I'm celebrating Halloween, shouldn't the inhabitants of 52 be doing so, as well. 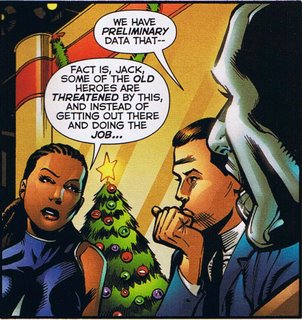 Then what was the deal with Jack Ryder and his Christmas tree in November?
I guess he really is the DCU's Bill O 'Reilly, taking back Christmas, one panel at a time.

Comments:
"Warner";
okay, that one took me a minute to figure out...!

I think you mean the Creeper, don't you?

I think anonymous is right, Jack Ryder is the Creeper. Vic Sage is the Question, and in the Himalayas with Renee Montoya.

And politically, DC is saying that Ryder is left-wing talk show host, not right-wing.

I used The Question as an example of one of the characters who should be operating in real time.

I can see how the wording could be confusing along with how Ryder's act is going down.

It seems to me he's doing more of a Colbert than a Stewart and Colbert is a parody of O'Reilly.

I tried to pick up some Halloween candy on, you know, Halloween, and all the store had was Christmas candy.

I would suggest that it is probably an(unheard) commentary on the increasingly early invasion of Christmas themed products.

Ditto. Certainly sounds like the kind of thing Ryder would take on.

I bet this is just a reference to what the retailes call "Christmas Creep"..that slow crawl of retail to before Halloween!

Except of course with Jack Ryder its Christmas Creeper!

The deal is factory-direct-to-customer shipping that passes the savings onto you!

Oh, so he's having to share the soundstage with QVC!