Jonesing For The Genius 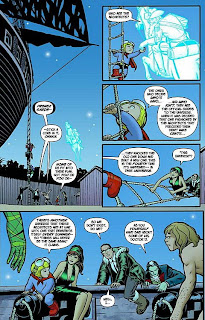 How beautiful is it that the best mechanism for explaining the DC Universe and its conflict with Marvel is a child who hasn't been in a comic in sixty years?

All of this and more can be found in the pages of Tales of The Unexpected.
# posted by Devon Sanders @ 9:27 AM

Comments:
I love the double entendre when he sez that "things didn't make cents"...ha! all we need now is a visit from Sugar & Spice or Billy & his Monster....

Which has actually shown up, back when Green Arrow re-launched.

Although, it was much changed.

Okay this is seriously getting f'in nuts. I'm not sure what time zone you're in, but I'm guessing that our posts were put up pretty much simaltaneously:

I hope they collect the Dr. 13 backup into a Trade... I dropped Tales of the Unexpected after the first issue cause the Spectre bores me

Well, I can attest to Devon has been mulling over this since over a week ago....so great minds would be as good an explanation as any...

Keith..thanks for correcting me..It is Stanley. My apologies.

Ya' know who they need to bring back know with all of this "Pirates of Caribbean" buzz???

The DC Pirate Brigade!!! I can hardly wait!!

The architects have done this 4 times? Ok - One would be the beginning of the Silver Age, second would be Crisis on Infinite Earths, fourth would be the most recent (Inf Crisis) but what is three? I was kind of out of things from late eighties to late nineties. . .

Zero Hour's considered one of the "crises" by DC Editorial.

Well, I can attest to Devon has been mulling over this since over a week ago....so great minds would be as good an explanation as any...

It wasn't my intention to suggest anything otherwise. I apologize if anyone else thought I was suggesting that this was anything more than a coincidence.

I never took it that way.