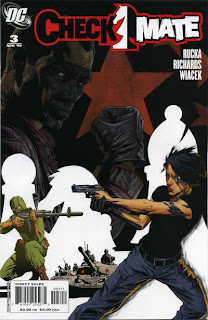 The ultimate multi-tasker, no one since Wally (The Flash) West, The Freakin' Fastest Man Alive!, has anyone been so prominent a member of not one, but two, DC Universe organizations... 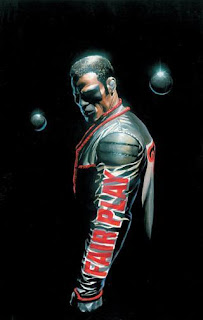 CPT Time does not exist in Michael Holt's world.

Comments:
So what the heck is CPT time?

Uhm, OK. It was also a sincere question. I have no clue what "CPT" stands for in this context.

Colored People's Time,
Colored-People Time, CP Time, or CPT, is an American expression (potentially pejorative) referring to a stereotype of African Americans or Latino as frequently being late. It is similar to "Banker's hours", in that the time kept is convenient to one person, but not another; dissimilar in that one refers to an authority opening and closing when it pleases, and the other a subordinate group not being as prompt or timely as the authority desires."

CPT Time does not exist for Michael Holt, in part because he has no patience for the antics of the Department of Redundancy Department.

That is, if you have the 'T' in the acronym, you don't need to say 'Time' again, do you? And with all the time saved by not repeating parts of acronyms, he never misses an appointment...

Y'know, that's always bother me, too.

It was always said as "CPT Time" whenever I heard it.

I'm actually just repeating it the way I heard it my whole life.

Wow... I'm so glad I've never heard that before.

Alan Scott, of course, was also on two teams at once -- the same two. But Michael Holt has done it longer, now that his one-eyed greenness is out of the picture.

Thank you for focusing, on what I think, is the right thing in my post.

And let's not forget that the Justice League may come a-courtin' him as well...

he's a popular man, and the third-smartest in the world, so I hear.

BTW.. care to define who numbers 1 and 2 are (I'm guessing Batman is in there, but I have no clue.. geek trivia needed!)

Has this ever been explained?

I searched for it and didn't find it . . . CPT has too many other meanings apparently. Thanks for the explanation . . . I think. On the other hand, I may have been better off not knowing that term. Anyway, shouldn't it be People of Color Time these days?

I don't like the idea of anyone of any color, green included, working for both the JSA and the US gov't, though. Seems rather conflict-of-interest-y. Getting it on with Sasha Bordeaux, though, I have 100% support for. Although I thought Mr. Holt was still holding a torch for his late wife... when did he get over that?

I had always encountered this as JST - Jewish Standard Time...

I've always wondered, why he is the third smartest man alive? Is that behind Lex Luthor, and Batman? Terry Sloan wasn't considered the second smartest man, so it's not playing up the Mr. Terrific legacy. Someone clue Me in!