Superman Does Not Have A MySpace Page... 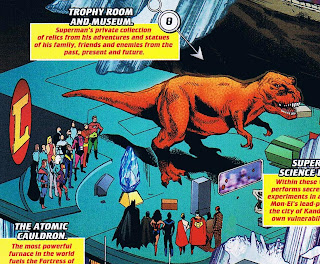 He "deletes" you by not giving you a statue in The Fortress of Solitude.

Supergirl, are you listening?

Comments:
We've got Batman, Robin, Wonder Woman, Nightwing, Powergirl, Kal-L, and Lois and Jimmy? What an odd group. No Supergirl, Superboy, Steel, or Perry; and neither Robin nor Nightwing strikes me as one of his closest heroic friends...

The Legion there seems kinda... reboteed. Coupled with the absence of Kon-El, it seems he doesn't update often..

That jerk has some nerve! Including Kal-L, who, before realizing the error of his ways, was complicit in the events of the Infinite Crisis and leaving out Kon-El, who gave his life fighting Superboy Prime. I know it's been said by many people many times, but I'll say it again: Superman is a dick.

Why does Superman have a T-Rex in his Fortress? isn't that Batman's "thing"?? Bruce is going to be pretty pissed that Clark is stealing all of his fashion bits. What next? A giant "nickel" to parallel the penny? Sheesh!

Just to show you how bad-ass he is, Superman went to the Marvel Universe and brought back Devil Dinosaur and stuffed it after he got tired of playing with it.

Why are there statues of the Legion? I thought...