OK, so I bought the Secrets of Isis on DVD and it's just awful... but in that suh-weet Seventies "AfterSchool Special" sort of way.

That way that a kid brings a gun to school and "everyone-learns-a-valuable-lesson-without anyone-getting-capped" sort of way.

If I had a time machine, screw going back in time and buying Microsoft stock, I'd go back and try and get a job writing for The Secrets of Isis.

That way, I could look forward to the future and knowing I'd be doing DVD commentary, saying stuff like, "God, I don't remember writing this show at all. It was the Seventies. I was coked out of my mind. Hell, we all were. Wanna learn how to fold a piece of paper into a boat?"

Two, she reminded me of someone kicking around TV, nowadays....

Call me "crazy" but I think Evangeline Lily kinda looks like her, even down to the crazy freckled nose...

Am I the only one seeing this? 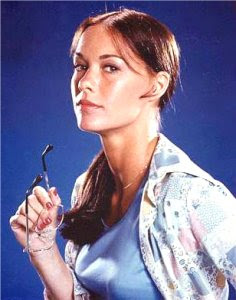 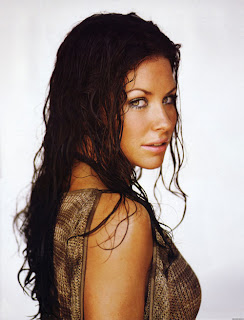 Comments:
Now that you point it out, they do bear some resemblance. Nice catch!

Maybe we could get Lily cast in a remake…wouldn't we al be lucky?

I can see it. Before reading the text I thought you were going to tell us about some hot sexy shots you had dug up of Isis

Never thought of it before, but you have a point.

Let's get Evangeline Lily out of that Lost @#$% and into Isis - The Movie!

I wasn't convinced, so I googled and found these:

Not only are you right, but I think you've just totally explained my Evangeline Lily crush (beyond "she's hot," anyway).

And lest we forget, Joanna Cameron was on an episode of the old Spider-Man TV show in a white bikini. That was pretty swoon-worthy, too.

I've been watching Isis too, and it's like a really inept version of the Wonder Woman show -- which, much as I love it, was no great bastion of artistic achievement.

Did you notice that the 1970's Isis's secret identity of Andrea Thomas is where they got the original name for 52's Isis, Adrianna Tomaz?