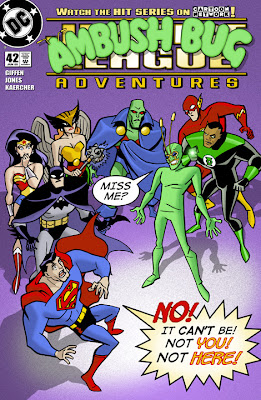 Geez, where does the time go?

Nearly two and a half years ago, I started this blog with the words, "I have nothing to say to you today."

That really hasn't been a big problem since.

I was going to do something big for this post but well, I'm a bit swamped this week.

Douchebaggery abounds and I must answer its call. (Ummm... hint, hint.)

On that note, I ask you a question:
"What brought you here?"

I'm curious is all. I see new and familiar faces here everyday and I'm beginning to want to put a bit of context to the whole thing.

Thanks for showing up and take care!

Comments:
It's hard to recall. I think I followed a link from Scip's blog, and stuck around for the fun and analysis.

I started reading Seven Hells because I wanted to read the blog of the comic shop manager who sold me Daredevil: Born Again and basically got me collecting comics again. As a bonus, I've made some friends along the way. Congrats on 500.

I came here via the Absorbascon, which I arrived at via a link from another blog whose identity has vanished from my memory.

These days Seven Hells, The Absorbascon and Progressive Ruin are the only comic book blogs I check with any regularity, largely because they're awesome, but mostly because reading them doesn't make me want to figure out a way to reach into my computer and throttle their creators, which definitely sets them apart from the bulk of the comics blogosphere.

That said, I do recall Mr. Bragging-About-500-Posts-In-
Two-and-a-Half-Years-Even-Though-
*COUGH*-Some-People-Posted-Double-
That-Amount-In-the-Same-Amount-of-
Time that a certain nordic soldier was supposed to answer a second batch of advice questions and has yet to deliver. What be up with that?

I believe I came here via The Written Word and was reading your blog for about a year and a half before I came to DC.

You are the reason that I kept coming back to Big Monkey after I found out that it had moved out of Georgetown.

I saw your name under the staff picks picture, connected it with the guy sitting in front of me, and your blog and [bing] I kept on coming back.

Congrats on making it to 500

I wasn't happy with the answers so I'm rewriting them.

There's nothing worse than "forced funny."

I just wandered my way here by meandering through the DC comics blogs.

Like many of the other posters above Scip was my gateway drug to the joy of Seven Hells so I guess that makes you the LSD to his marijuana. Or something.

Some homeless guy on 14th street kept mumbling about the seven hells. So I googled, and here I am.

Why? Because Hawkman is a f*#king rock star, baby! WOOOOOOH!

I don't remember - think I must've followed a link from the Absorbathingie. Or vice versa.

I came to Seven Hells after I met Devon at the old Georgetown store.

Apparently I'm one of the few people who read/discovered the Absorbacon *after* Seven Hells!

Happy 500th! Look forward to seeing 1000!
or if you're Grant Morrison JLA-Seven Hells One Million!!!

I think I got here via a link on Newsarama. Anyway, congratulations! You've got just about the best comics blog on the Internet here!

(That's meant to be less depressing than it sounds...)

I think it was simply seeing your blog's name in the sidebars of so many other blogs I started reading (indeed, yours was one of the first 6 or 7 comics blogs I started following regularly).

I must admit the name drew me to it, and then Lady Cop made me stay.

I can't remember the exact chain of events, but like so many others, it was the absorbascon, seven hells, Jon Hex lives, and so on, until I found myself checking the whole "big monkey" family of blogs, and then blogs that those referenced, and now I can't get anything done at work cause I'm checking the blogs. Don't even get me started on the podcast!Finding a group of bloggers who remind me why comics are good has changed my life much for the better.

I followed a link that was on the sidebar of the old Invincible Super-Blog, but have only become a regular reader in the last couple of months.

If you want to go back further than that: I got to the ISB from a link on a "Bigger than Cheeses" Web comic, which I found through an ad on the "Rob & Elliot" Web comic, which I discovered when Eric Burns Websnarked them during their "Sluggy Freelance" Saturday fill-ins. Websnark, I found through a link on "PVP"; "PVP" I learned about through "Liberty Meadows" comic books; "Liberty Meadows" I learned of through "Wizard", which I first picked up because the cover of issue 50 grabbed me back in the day...

I could go on, but we'd start getting into stuff about how my parents met and how my grandparents all moved to Arkansas, and it would just get even more ridiculous.

Thanks for the entertainment!

I, too, came here through the Absorbascon.

I had to know who this fellow was that "Erreth Not".

I came through the Absorbascon and stayed for the "Kyle Rayner: Adult!"

I have no idea how I found this place*. It was the first comics blog I'd ever read though (who knew such a thing existed! heh), and it remains top of my blog list for daily checking.

I even got the idea for my Firestorm Dating Tips thing from your Kyle Rayner: Adult posts.

*actually, just as I was about to hit 'submit', I remembered! I was googling for Power Girl pictures (don't remember why), and that picture of the hot blonde dressed as Kara was in the results. Naturally I had to take a closer look at the pic (yowsa), and your blog appeared. I read, I liked, I stayed.

Oh, it was definitely "Kyle Rayner;Adult!" that suckered me in. Speaking of which...!!

I got here by Google Blogging "comic books" or something and your title sounded most interesting. And that was the day you were posting pictures of Hawkman motherlovin' tearin' stuff up.

I've been coming back ever since.

I came for the DC fanboyism, but stayed for the spinning Mary Jane picture.

I got back into reading comic books a little over a year ago (In truth, I only read comics for a couple years in middle school the first time around, and they were 90% Image Comics). I live in DC, and I tried the three shops I could find in the city, and easily loved Big Monkey over the other two. From the first day of walking in, through the emails I sent to the shop to setup my pull list, you have been very friendly and helpful. The lack of an actual RSS feed for the Big Monkey "blog" annoyed me, but then after listening to the podcast I realized that you and some of the other guys had blogs of your own. So here I am, eternally a few weeks behind, just like I am in emptying my box (this week I have the excuse of just getting back from my honeymoon).

Anyway, the short version is: I got here via being a customer at Big Monkey.

Now I know who you are!

Hah! I figured you already knew. :) Not that I've posted much (yet). I keep pretty quiet because I'm not all that knowledgeable on all of the mythos and history. A lot of it comes from a good friend that grew up reading X-Men and Superman.

Oh, and thanks on the congrats. :)

I came here through readbing the Absorbascon as well. Scipio did a good job of promoting you.