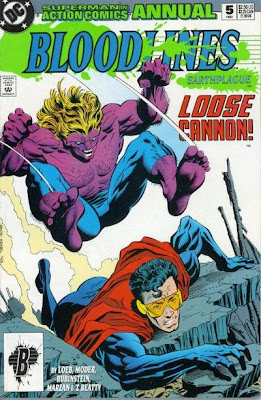 Yesterday it dawned on me as I put JLA/Hitman #1 down:

I'm reading Hitman again. It made me happy. I missed Tommy.

Anyways, that led me to do this, take a look at the thing that seems to spawn heroes.

"The event book," to be exact.

Just as surely as something such as Bloodlines spawns a Hitman, a Millenium craps out a New Guardians.

So, let's take a look back at some of DC Comics' major events and see some of the major character contributions these events have had on The DCU:


THE CRISIS ON INFINITE EARTHS:

DC's integration into their universe of the Charlton characters. Characters as disparate as The Question, Blue Beetle, Captain Atom, Nightshade, Peacemaker and Son of Vulcan were introduced into The DCU and twenty-plus years later remain impact players in the overall scheme of things.

The integration of DC's Golden Age characters into one shared universe.

The Flash III (Wally West), the return of The Martian Manhunter as one of DC's "big" characters, The Suicide Squad, Shazam!, Guy Gardner (as a major Green Lantern), The Justice League, Wonder Woman's first interaction with DC's superhero community.

None, really. This book had everything. In my opinion, this is DC most successful "event" in terms of overall completion of story purpose. Every hero it focused on is still having an impact on The DCU.

None. Other than being DC's first weekly crossover series, this book contributed absolutely nothing to The DCU.

Millenium is also the "event" that did away with The Green Lantern Corps.

Having Valor (Mon-El) be the one who seeds the planets that, 1,000 years in the future, become The United Planets was one of the most brilliant uses of retconning I've ever seen.

Vril Dox & L.E.G.I.O.N. The precursors to The Legion of Super-Heroes.

It tried making Snapper Carr a major player in The DCU by reintroducing him as a member of The Blasters.

Monarch, a character who today as the former Capt. Atom, for good or bad, is attempting a major strike against The Multiverse.

The choice to make Hawk (of Hawk & Dove) totally destroyed him as a character. Still an awesome HeroClix, though.

ECLIPSO: THE DARKNESS WITHIN:

None, really but it did lead to the death of Wildcat II in the Eclipso series so it wasn't all bad.

The eventual death of Wildcat II. A win-win, when you look back on it, really.


So, my question to you is this:

Of the six "events," which one had the most lasting character contribution(s) to The DC Universe?

Of the six, which event birthed the worst contribution?

Tommorow, War of The Gods, Bloodlines and much, much more...

God, help you all.

Comments:
I didn't enter the DCU until 1992 (I was one of those that jumped on during the Death of Superman hype), so I wasn't reading during any of these crossovers. The only one I've read in it's entirety is Crisis on Infinite Earths, so that has to be my favorite. All the characters you mentioned, plus the female Dr. Light!

My least favorite has to be the Hawk/Monarch deal. Later leading to Extant and all that goes with it.

I may get simultaneously banned on all the comic blogs I post on, but I actually liked Bloodlines. I even bought Bloodpack when that came out.

Well I have a special place in my heart for Invasion because I have pieced together a lot of the story from disparate places. Had read like5 or 6 tie-in issue before I ever read the actual series itself.It defiantly seemed the best of the lot and was much more plausible then they whole "everyone is a Manhunter" crap of Millennium (especially the Legion crossover issue)

But in any case:

Legends probably had the most impact since it set up a ton of titles that had really long runs, and was the beginning of the new DCU.

Also the impact of Invasion! was contained to only 4 titles that survived at any length (JLE, Legion of Superheros, L.E.G.I.O.N. and Valor) Millennium was crap and Elipso and Armageddon have only affected the JSA


So in my rather long winded response... Legends has had the greatest impact (even though Armageddon did help to set up Zero Hour) and Millennium was the worst

Whoa...long thought out posts? I must have wandered into Those Wednesdays on accident.

BEST: Crisis on Infinite Earths-reset and established the "modern" DCU as its been known since 1986. Pre1986 DCU was a very different place.

WORST: Millenium. Awful characters. Terrible waste of a GREAT bad guy (the Manhunters) and as much as I like Steve Englehart and Joe Staton..ugh..an awful looking book....Plus, some of the worst ethnic stereotype characters invented since Vibe....the flaming gay Spanish guy, the computer incarnate Japanese guy-called RAM no less, ugh...

Plus it was the Manhunters that made them kill the Outsiders' host scientist Dr. Jace!

I've never read Millenium, but the crossover issues I've read are all ridiculous. Rocket Red is a Manhunter! Flash's Dad is a Manhunter! It was all mercifully forgotten, though, so I don't know how much of a negative contribution it actually had.

I'm not all that crazy about Invasion, but it did bring about good things like the end of Kupperberg's Doom Patrol (and, consequently, the beginning of Morrison's) and some great developments in JLI (Fire's new powers, Max's mind control, JLE). So it's tops in my book.

Eclipso also killed off the Will Patton Starman, which was good on two levels: 1) He was annoying, 2) It cleared the way for Robinson's series.

It's hard to argue with the New Guardians as the worst thing to ever come out of an event crossover. I mean, crossovers spin off new books all the time, but the SOLE purpose of Millenium was to launch The New Guardians. Then their book got cancelled, and various members were killed off over the years with little fanfare.

"No man escapes the Manhunters!" was pretty cool, though.

Well, any book that reintroduces Guy Gardner has to be tops in my heart, so I go with Crises all the way.

I actually rather liked Invasion too.

Millenium was a bit on the...dull side.

So are Zero Hour and the Final Night in the next installment?

Hey Devon-
Millennium *did* produce a failed superhero team, those neo-Guardians that Ganthet tried to sponsor. Failed experiment quickly forgotten but it did contribute something (however minor) to the DCU.

Kind of interesting to see how few of these ginormous crossover mega-events had any lasting impact. I suspect it's because comics are by their nature a kind of storytelling that rejects huge and permanent changes.

- Reed and Ben were both severely scarred in FF-- and it lasted a few issues, then vanished.

- The Hulk came back from Secret War I on a crutch and was all better in one issue.

- Spider-Man gets an all-black costume that later morphs into a major villain (possibly the one outcome of a Marvel event that's had lasting repercussions).

The (first) Crisis event is the only one that's had a lasting effect.

The off-shoots from Legends had the most success, and those titles that you mentioned (as well as character revamps like Superman and Captain Marvel) have had the most impact on the DCU.

Millenium was the hugest disappointment, and I'll agree with Christopher that it was ugly and dull (and that "No man escapes the Manhunters" is really the only good thing to come of it).

Invasion was probably my favourite of them all, because, well, it's a massive alien coalition taking the offense and attempting to destroy Earth before it's massive output of metahumans ruin the galaxy... brilliant, fun, and pretty much self-contained.

2001 was fun, but forgettable, and was essentially a DC "what if" or "Elseworlds" before Elseworlds existed (which would be the 2004 Annual inspiration, iirc).

Eclipso was decent, but yes, its lack of impact has left it overshadowed by the others that preceded it.

You can throw Pariah, Harbinger and Lady Quark into Crisis's "not so much" file.

I'd also group the Wally West Flash with Crisis, but I can see why you'd put him in Legends. Legends *does* seem like the most influential of these six, but very little of it would have been possible without Crisis, IMO. Though the Suicide Squad would rock on any Earth.

Is the Lar Gand/Mon-El/Valor "seeding of worlds" still canon? I don't think so, but I've only read about the first year of the "Threeboot" Legion.

Devon is absolutely right that it was one of the best pieces of retconning ever. Not only did it make an assload of sense for replacing Superboy, it even explained the part of the Legion that always stuck in my craw: how hundreds of planets in the 30th century had human populations that all shared particular super-powers. Simple, direct, elegant.

Plus, Lar Gand had the best honorific superhero name ever. Imagine encountering a legendary superguy so badass that he is known as "Valor."

You know what you're getting when you face off against a man named Valor: unrelenting whoopass. Sweet.