One Flew Over... Arkham Asylum? 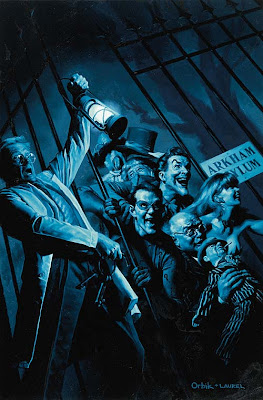 A friend of mine was watching "One Flew Over The Cuckoo's Nest" the other day and noticed something kind of cool.

Three of its stars went on to play Batman villains.

Can you name which three actors and which villains they played, respectively?

--------
Also, when The Teen Titans (Robin, Kid Flash and Aqualad) formed, what was the reason behind Supergirl's not being available to join the team?

Coming soon (for at least one more time), the return of Kyle Rayner: ADULT! and tomorrow, the return of the weekly feature 19 Questions & One Statement.

And to (hopefully) answer your second question, I believe Supergirl may have still been Superman's 'secret weapon' at the time.

I heard that the reason for Supergirl's exclusion was that Weisinger wouldn't let any other editors use the Superman Family.

Ooh, let me take a stab at "Kyle Rayner: Adult". It'll be about him doodling on walls rather than trying to figure out how to escape confinement, right?

Screw "19 Questions and 1 Statement." The regular feature whose return I demand is "All-Out Living with The Viking Commando!!!!!!"

Maybe Supergirl wasn't available because she was already in the Legion?

Supergirl's existence was still a secret, wasn't it? No joining high-profile super-teams when nobody's supposed to know that there's a 'backup' Kryptonian around in case superman died.

This would be the time when she was shipped off to an orphanage, occasionally did superheroics without ever being seen by anyone doing them (and possibly adopted a few one-shot heroic identities pretending to have completely different sets of powers; I don't know this for sure but it certainly sounds like the stories of that era), and only really getting to let loose with the Legion in the 29th century.

The return of Kyle Kayner: Adult!

I am giddy with anticipation.

Correct me if I'm wrong but by the time the Titans formed, she wasn't a teenager anymore.