Last week, after much discussion and shooting down of things, we chose not to discuss Marvel's "event," Annihilation on last week's Big Monkey Podcast.

The reason why we chose not to do so were simple.

Only two of us (Ben & Jon B.) had even bothered to follow it. Why is that, I wonder?

I've always wondered why. Was it that, of the four, it had the least "star power?"

Villains United featured writing by fan-fave writer Gail Simone, ass-kicking art by Dale Eaglesham, telling the story of six villains vs. a secret society of super-villains numbering in the hundreds.

Days of Vengeance worked on the premise of a few C-list magic based heroes proving what it is to be a hero in a futile attempt to contain DC mainstay, The Spectre.

The OMAC Project had strong ties to Batman and served as a launch point for a future Checkmate series.

Written by Dave Gibbons and drawn (most of the time) by future Green Lantern artist Ivan Reis, Rann-Thanagar War mainly focused on the conflict as seen through the eyes of Rann's Adam Strange and Thanagar's Hawkman.

Of the four R-T War was the least well-received. As I remember it, the blogosphere's reactions to it all were more interesting than the actual war, with various blogs declaring war upon one another in the name of the hated Rann or our beloved Thanagar.

(Guess which side I came down upon.)

But I digress, we left Annihilation exactly where we left it... nowhere. What is it about "space adventure" that seems to only translate to critical acclaim and not "fan favorite" status?

Is it that the Big Two of DC & Marvel's sole focus seems to be on superhero fare?

Are the events of Countdown or World War Hulk just that more interesting?

Is it that space opera ain't very good for the bottom line? 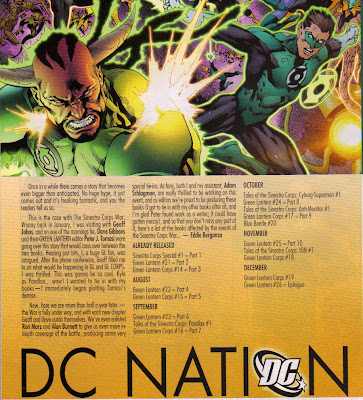 Is something like Green Lantern: Sinestro Corps Corps an anomaly, an exception rather than the rule?

What do YOU think?

Comments:
Am I right in interpreting that the Sinestro Corps storyline is going to run eighteen issues? Are they going to collect it in a single volume or break it into two? Or three? I'm already pretty annoyed at the idea of Justice being broken into three hardcovers, so I haven't bothered with it. But I'm very interested in reading Sinestro Corps, even if I can't afford the floppies these days, and I will be more annoyed if I have to fork over $25 twice for the whole thing. I'm sure it'll be better than Very Pretty Paintings of the Superfriends, but that's still a pretty good hit to the wallet.
But I do love the ol' magenta-head, and I can hold out hope that he will recruit the zombie corpse of Ch'p. There was previously a zombie GL, right? I wasn't imagining it, right? So a zombie YL makes perfect sense, right?

I think the answer might be in the titles you mention. "Kree-Skrull War" and Invasion! were less space adventure than "superheroes in space." Not to mention that Invasion! (don't forget the exclamation point!) was more the wonderfully simple premise that they ran with, "superheroes fighting space on Earth."

I like most of DC's space stuff (and the Green Lantern Corps are a particularly good avenue to it), but for whatever reason, Marvel's has never interested me much. Seems like most of it's Thanos being a boring Darkseid clone, gigantic "cosmic" beings standing around in space, and Ronan occasionally accusing someone.

So while I've heard good things about Annihilation, the characters don't interest me enough to try to decipher its organizational principles (what ties into what, etc.), let alone read it.

I think the crucial point is that a whole lot of this space opera is ultimately BIG space politics rather than individual stories about heroes...
I think that space is difficult to make "real" for the normal reader for various reasons and "war in space" while sounding cool is still a big larger than life event that is difficult to capture.
Some of the best space opera focuses on indvidual freedom fighters efforts against oppressive space empires...ie Starlin's DREADSTAR..which sold well enough to keep the book going for about 5-10 years or so.
I think that's why the Sinestro thing has also started out strong, you've got the drama centered around some familiar characters that aren't overshadowed by the massiveness of the background setting. But I bet as you get farther away and show it on different fronts and the longer you draw it out- you will start to lose the readership because by that point, you've lost a storyline and made it a cross-over!

I haven't yet read Annihilation
but part of me wants to just to see Rocket Racoon, Groot and Star Lord again..but honestly, didn't they just HAVE a big Marvel space cross-over (the one that Nova talked about?) and shouldn't it be over by now?

I mean really,after awhile, who cares??

Was Rann-Thanagar War critically acclaimed? I don't know anyone who liked it. I'm a big Adam Strange fan and a bigger Hawkman fan, and I thought it was unreadable.

Of course, I do have an irrational hatred of The Omega Men. That might have something to do with it.

Come to think of it, "too much Omega Men" was the reason I didn't like Invasion #1 much. It got better though.

Well, for one thing, so much of Marvel's hype machine was focused on Civil War that Annihilation couldn't help but get pushed to the wayside, and it's not the only title(s) that happened, too, either. I think Agents of Atlas could have been more successful if they had thrown it even the smallest fraction of the amount of support Civil War got. Nextwave, too.

I think another factor is that Invasion! and Kree-Skrull War ultimately involved Earth, whereas Annihilation takes place entirely in deep space (as I've read, anyway, which is only the first collection so far), and the only real humans seen are Nova, Star Lord, Moondragon, and that girl who hangs out with Drax now. I think a lot of people are turned off by space stories that don't relate as much to humanity... that's the stuff of the hardcore s-f fans, not Joe and Betty Casual Reader.

Is GL:SC that much better? Yes, yes it is.

It's replaced WWH as my favorite saga of the summer.

Oh crap! Do I now like DC better than Marvel?

I always thought that pure space stories have a harder time finding an audience, unless connected some way with Earth. Invasion!, Kree-Skrull War, all those had ties to Earth and took place in regular books. Annihilation and Conquest are, with the exception of Nova, self contained in mini-series. It becomes a matter of liking the characters enough to want to read the story, because it won't affect the regular books you've been reading.

Christopher, the original Annihilation was focused on the characters' efforts to stop Annihilus, with a lot of effort put into fleshing out Nova's new status and individual transformations because of the War.

Annihilation might've had the problem of kicking things off with a bunch of mini's with mostly small-name characters. Super Skrull and Ronan have only ever been bit players in other characters stories, so that's not automatically going to pull people in. Which is a shame, since they were fleshed out extremely well, particularly in Super Skrull's case (that first issue is just sooooo cool). Who would've thought you could end up rooting for SS. Nova isn't a major character either, which only left the Surfer to pull in any sort of pre-existing fan base. Which in my case it did, because Keith Giffen did such an awesome rendition of the Surfer that I had to go and get all the related series.

I don't think Annihilation proper got a terribly good promotional push. Granted I read mostly DC currently, but I don't remember noticing it getting mentioned in the Marvel titles I was reading. Despite being a space story, it was very much tied to a human voice, so I don't see any problems with people relating to it. Sucks, because it was brilliant. (oh, and I just got the art for page 23, issue 1, last week. Aegis kicking the Silver Surfer's ass. Hell yeah)

Conquest may be running in to the same problem I mentioned, by kicking things off with mini's of minor characters. You'd think people would learn ;)

Planet Hulk was a big hit. As you point out, Sinestro Corps appears to be a big hit. The Animal Man & co lost in space arc appeared to be one of the more popular parts of 52.

I think it comes down to marketable heroes and good writing and art, myself.

Superheroes from space: started it all.

Superheroes from space in space: Meh.

That seems to be the overall opinion if one can be derived from this at all. I personally liked L.E.G.I.O.N. a heck of a lot, and that was a space opera.

As far as the Rann-Thanagar War issue, I think the sole involvement of Dave Gibbons as writer had a great deal to do with it's less than stellar reception (no pun intended.)

He can do procedural stuff well, but the problem is he does it to well. It reads like a "day in the life," literally. When you watch COPS, you don't wanna see them filling out paperwork.

I'm not a completely casual comics reader, but I'd never even heard of the vast majority of people involved in Annihilation. I'd heard of the Silver Surfer, but never really cared about him, and honestly, I didn't even know he was in this when it was first coming out.

Rann-Thann, which I did read, was just sort of crummy period.

I always thought that the cute comics-blogger trend of putting up I'M FOR RANN / THANAGAR posters was just an ironic commentary on a truly crappy miniseries that nobody really cared about one way or the other.

Like that South Park presidential election episode where the choices were Giant Douche and Turd Sandwich.