Dignity In Satin: Part One 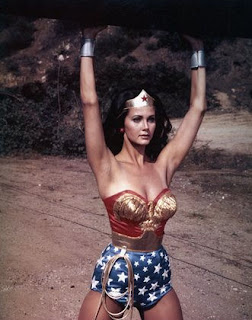 For a change of pace, I thought I'd give you over the week, the loyal Seven Hellion, something I was supposed to be paid for free.

In 2006, I was contacted about contributing to a Wonder Woman anthology but like most things literary, it never came to be. "No Wonder Woman movie, no anthology," they said so instead of letting it go to waste, sitting in an untitled folder...

On the whole, I can’t recall 1975 all that well. I was only three years old at the time. I am, though, fairly certain that I was probably wrestling with the dilemmas presented to much of America’s three-year-olds. For one, I was probably trying to get that whole "too-cool-for-pre-school" thing down to a funky science. For another, I was probably very much trying to not think of my nose as a thing of play, barring that, how I could actively work it into next year’s "America’s Bicentennial" celebrations. You know, just to give the family something to talk about in their golden years and, well, because I was nothing if not a patriot.

Again, I don’t remember much about 1975 but I am fairly certain that it was the year that my little life changed -- completely. At least I assume it did because, again, I don’t recall much about 1975, but I do know this: my little skull exploded. In 1975, something beautiful was unwittingly (or was it wittingly?) set into motion. Something I, to this day, am only just beginning to somewhat comprehend some thirty-plus years later. I didn’t know it but I’d found ... love . I have not, nor do I care to find a way out to the other side.

In 1975, my mother plopped me down in front of a television, introducing me to Lynda Carter and to Wonder Woman. I was quietly mesmerized sitting there, bathed in the grayish glow of our black-and-white television.

Who was this...this...person? Why was she doing this to me? Why was she making me hang on her every word? Why did Lynda Carter’s portrayal of Wonder Woman have to be so damned... different?

Who gave the character Wonder Woman, this White princess from a fictional utopia, dressed in a star-spangled bikini come to me, a smallish Black child living in urban Washington, D.C., permission to come through my television and seemingly speak only to me? Who let her into my house? Who let her into my heart?

Despite our obvious and vast differences, there was something there. Something I could barely wrap my head around. It spoke to me. There she was, Ms. Lynda Carter, dressed up in a bathing suit, high-heeled boots and a golden rope, smiling (God, that smile!) all the while. She should have looked ridiculous but, of course, she didn’t. She looked regal, elegant. How was she pulling this nearly superhuman feat off? I didn’t know it at the time, but it was so simple – even though but many others in her position failed to comprehend... ..

Lynda Carter knew what many others did not. Superman’s "S" sells itself. As difficult as it may be to believe, it is easy to cloak oneself in "Bat Shark Repellent" and let the moment speak for itself. Lynda Carter found Wonder Woman’s core and let it shine for everyone to see. If the Wonder Woman were to survive, Ms. Carter had to bring to the role that one divine thing women seem to have in greater supply than most men: dignity.

Now, I’m sure, that I was somewhat aware of the concept of the super-hero. To be a super-hero one had to have a costume, powers, or a little boy like the one that Batman had on the tv show... and so yes, dignity had to be in their somewhere, right? Because they were guys, guys who, I guessed, had dignity. Up to this point, I assumed that all anyone had to have to play one of these "supermen" was:

• Show a willingness to puff out one’s chest at the first sign of trouble.

• The putting of fists on one’s hips while spouting ludicrous dialogue at the second sign of trouble.

• Take yourself and not the character way too seriously.

• Don’t ever forget you’re a "serious" actor, after all.

• Above all, be eager enough to earn one’s pay as a serious actor while wearing satin briefs.

In watching that first episode of Wonder Woman, I was taught more about gender equality than any lecture I ever could have sat in at anyone’s school. In Lynda Carter’s first episode, I found out that women, unlike men, are elegant in satin briefs. In satin, I glimpsed dignity.

Comments:
I have a theory, largely unfleshed out and most likely idiotic, that the three female characters who had the greatest impact on the male psyche of my generation were: Lynda Carter's Wonder Woman, Catherine Bach's Daisy Duke and Carrie Fisher's Princess Leia.

I recognize that I could just be speaking of the three female characters who had the biggest impact on my psyche, but I have had it confirmed by enough members of my peer group to appreciate a larger pattern at work here.

And you're completely right. Carter's Wonder Woman (like Christopher Reeves' Superman) worked because you never once felt as though she was even the slightest bit uncomfortable in that outfit--it truly seemed as if it had always been designed with her in mind.

I wonder whether "Wonder Woman" was telecast in New Zealand; one would think so given the character's worldwide popularity. I would think so, because I'm guessing that in her youth (she was born in 1968) Lucy Lawless sensed this in Wonder Woman, and somehow these qualities carried over into her portrayal of Xena some two decades later (although Xena's background, as one who was formerly evil, and origins are substantially different). Lawless' Xena always retained her dignity, even in the comedic episodes. And thankfully, Lawless had the comedic experience to give her character the proper balance in those eps without letting her deteriorate into farce.

I have very dim memories of Wonder Woman being on New Zealand TV in the 80's, and friends of mine have said they saw it in the 70's. So, there you go.

Of course, being the first county to give women the vote might've had something to do with it too. ^_^

When FX went on the air in the summer of 1994 (and I really wish I'd just recorded big ol' swaths of FX back then, when the whole network felt like something broadcasting out of a few back rooms in a New York office complex), one of their staples was "Wonder Woman".

Word spread pretty quickly around Holcombe Hall at the University of Arkansas that "Wonder Woman" was showing daily on the big-screen TV in the TV room, and before long, about 15-20 guys taking summer courses would gather to watch together.

One day a co-ed came in and saw us. "Why are you guys watching this?" she said. One guy told her to be quiet.

"You know she doesn't look like that anymore," she said. "This is from like 20 years ago." At that point we started yelling at her to shut up and go away. She stormed off in a huff and we 19-to-22-year-old guys went back to watching "Wonder Woman."

It's one of my favorite little incidents from college.

It's probably a measure of either Lynda Carter's performance or my own tenuous grasp of reality as a child, but it wasn't until...well until I started reading comic blogs that it occured to me that she might have felt "odd" in that outfit.

As far as I was concerned, WW was a real person--certainly she had better right to be real than all the usual crappy residents of crappytown that I met on a daily basis--and that was just how she looked. You could tell me all you want, about her wearing miniskirts and hanging out with a blind Chinese guy...I don't care. If you're Wonder Woman, that's what you wear.

Lynda Carter still looks good.Don't think anyone so far will replace her in that role-lease way they haven't mentioned anyone as good as her.She thinks a Cathrine Zena Jones type might work.I just wonder where they find a half Irish/Mexican chick blue eyes.I Wonder Woman's Greek,but you know we all think of her type as the character.

i really enjoyed the topic . loved it . i will surely book mark this blog . thnx a lot . hope to read out some more interesting blogs soon . have a good day
Colchester Plumber