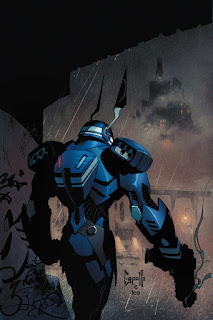 Was Batman #41, the first issue taking place in the new DC You Universe a boom or a bust?

Find out in my latest Thor's Comic Column review for Bleeding Cool!

Comments:
I liked it too.

Still not clear on whether "Endgame" was real or not. The mention of the Joker's latest rampage implies that it was a recent event and therefore likely to be Endgame. The end suggests that Endgame was all in Batman's head courtesy of Scarecrow venom, and he's still getting his head together after that.

Scott Snyder is more than just a good comic book writer; he teaches writing at the university level, so I am confident this is more than a temporary gimmick in Snyder's hands. Smart money says there will be themes, structure, foreshadowing, and the other stuff we literature connoisseurs have come to expect.

Admittedly, I'd have to read it.

My DC hiatus has been a long one.

That's again for checking me out!

Your blog is always worth checking out, and even if the traffic is currently a little light, I figure you ought to get at least one response when you post.

Here's some discussion about whether "Endgame" is real or hallucination, mostly so you can see the arguments in favor:

Your comments and care that I'm getting a response mean a lot to me.

One of the risks of taking a nearly seven year hiatus from this blog is that when you return you're pretty much assured the audience that was there before may have moved on.

Looking to remedy this with "Seven Hells!" exclusive content and just showing up as much as possible. All of that to say, if you keep commenting, I'll keep showing up.

And I'll read the article... soonish.

As far as I'm concerned, seven years and you haven't missed a beat. It's still the sort of content I find all too rarely on the Internet.

As soon as I can go out and get "Damian: Son of Batman", I'll be able to comment on that.