New 52 And The Absence Of Joy 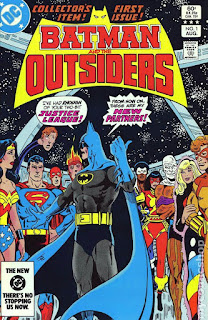 ﻿
My new article on Bleeding Cool: "The New 52 And The Absence Of Joy"

I don't mind DC as a series of fiefdoms; in fact I would say I prefer it. A world in which Superman could realistically round up all of Batman's enemies in an afternoon, is a world where it falls to storytellers to keep Superman out of Gotham. Different heroes, different cities, different tones ... that much I am good with. But on the balance, I say your criticisms are right on the money.

I've often said that the "real" Superman has been all but absent in the nu52, and even then I'm not sure how often he's shown up since the start of the Bronze Age. By the "real" Superman I mean the one you know will be there for you if he knows you're in trouble, no matter what. That's the number one thing that needs to be present in a good Superman story IMHO, and we get precious little of that these days. (Thing two: he inspires people. Thing three: he uses his many powers creatively.)

DC is still in coping with its inferiority complex vis a vis Marvel, and is responding like a teenager trying way too hard to prove it's all grown up. We'll be better off when DC goes off to college, discovers girls and pot, and learns to loosen up again.

About the Joker, I agree Snyder has gone off in a horrific direction. This is a minority opinion at best, but I say the "Endgame" story was entirely in Batman's head; remember that it started with Batman shaking off some Scarecrow toxin that makes you experience your death over and over, and that's what we got in "Endgame". Plus, so many elements of the story had a nightmare quality and happened without explanation, I say that we were seeing Batman's worst nightmare: that the Joker is an eternal malevolent force.

Glad you liked the article!

Great points you've brought up; especially the one about The Joker.

Still, as much as it may have done with the story being told, the gruesomeness of it all was a bit off putting.

I don't want everything to stay staid and idyllic but I do want these characters to act, for the most part, on-model.

They're not doing that.

Well, if there's any character that can show up again and not be bound by his behavior in previous appearances, it's the Joker.

A detail that came up during Zero Year. Bruce started his war on crime dealing with the Red Hood gang, led by a wily crazy dude (wink wink) that was terrorizing Gotham. Bruce's original M.O. was to do a Master of Disguise thing, so Red Hood knew there was a vigilante after him, but he didn't know who. Events eventually persuaded Bruce to become Batman, and the first time the Red Hood saw Batman was the moment he fell in love with him.

Now look at it from Red Hood's perspective. Imagine there's someone you're feuding with, say someone else in the local chess club. Every time the club meets he's there and you're there, and you're both getting a little angrier every time you meet. Then one week the club convenes and he shows up, and you've gotten him so angry he's decided to dress as a squirrel. You can pretty much conclude that he's gone crazy, crazier than you even thought it was possible to be. And that appears to be why the Joker loves Batman.

About DC characters being on-model in general ... ye gods, does DC even have a sense of what the model is? How can DC launch new cartoon series after new cartoon series, generally hit the tone of the characters pretty well, but have so much trouble with consistency in their comics?

... I think I know the answer to that, the problem is the editors. If your job is to shepherd the various Superman titles, for example, as an editor it's your job to make sure Superman is behaving on-model, not just pay Lobdell (or whoever) for turning in a script on time. I feel that most problems with tone or motivation could be solved with just one or two tweaked word balloons, though sometimes the fix could require more.

Recently in Geoff Johns's Superman run, Superman fought Ulysses, whow as basically the Superman of another world, and he had a nefarious scheme to teleport six million people from earth so their essences could power that other world. (So basically, Post-Crisis Superman Plot number 5.) By the end of the second to last issue of that arc, their world was destroyed, because Superman failed to save them, and Ulysses spent the next issue being angry at Superman (understandably for once). If I were the Superman editor, the first thing that would hit me is, Superman doesn't let even "deserving" bad guys die, especially when the "bad guys" can be described as a civilian population, not all of whom are necessarily in favor of their society's methods. The second thing that would hit me is, there's a solution at hand, introduced naturally in the story. So somewhere in the final issue of the arc where Ulysses is ranting at Superman, as the editor I would insist on a change of plot that could be implemented just with word balloons: before that other world got destroyed, Superman used its teleporters to transport its inhabitants to a fertile world that has everything they need to survive, provided they learn to work for the common good rather than exploit and abuse one another. That's Superman saving the day, bringing justice, and making a statement about the common good all in one stroke. I think it's a better ending, it's more on model, and clearly it didn't take a genius to come up with it. Why the hell does DC have so much trouble? I know that's the sort of story I'd rather read than one where Superman fails to save the day.