My Prez #1 And Robin: Son Of Batman #1 Reviews At Bleeding Cool 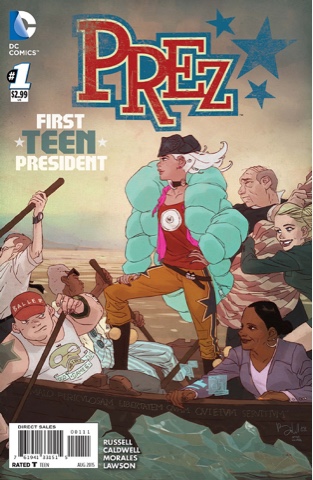 New reviews of some of DC You's latest offerings by me!

Can a girl who got her ponytail stuck in a fryer become President and be the most thought provoking book on the comics rack?

Can a pre-teen sidekick with a penchant for beheading find his humanity?

Find out this and more at Thor's Comic Column!

Comments:
Spot-on review of "R:SoB". I just realized that the acronym says it all: he's a little SOB, but the's our SOB.

One thing that informed Tomasi's version of Damian was his own son; Tomasi gave Damian his son's naive confidence and drive to be an adult. I wondered how Gleason would do, since he's not known as a writer and he may not have a kid, but he's got a handle on Damian just fine. Good story idea as well, slowly revealing the Year of Blood.

I have no use for Nobody's daughter, apparently to be called Nobody (or, perhaps, Nobody's Fool). She's a natural to bring to the table -- if the first Nobody was what Bruce Wayne could have been, then you could do a parallel story about Damian facing what he could have been -- but man, the character is such a placeholder. So inconsequential that they didn't even bother to come up with a good name for him.

You probably weren't following the nu52 when it first came out, but it showed Damian trying to be the Robin to Bruce Wayne rather than to Dick Grayson, and it just wasn't working: Dick had been emotionally available to Damian and the big brother that every kid wishes they had, while Bruce was domineering and really not a very good dad. The "Nobody" arc had to do with a rival, bloodier anti-hero (Nobody, of course) showing up and offering to take Damian under his wing, and Bruce learning to man up as a father. If that sounds like a creepy / dumb / weird thing for an anti-hero to do, well it was, and Damian ended up killing him, and I don't think he was the slightest bit missed.

One thing this comic got wrong: Damian's cat is named "Alfred"; the name "Pennyworth" is reserved for the butler.

The great thing about taking off as much time as I did from The New 52 was that I could come back with a bit of an open mind.

In a lot of ways, Prez made me miss Vertigo as it was.

Vertigo was a place for forward thinking comics and Prez would've been an exceptional fit. My fear is that, as great as it is, with its future setting and sly satire, it may get lost in the DC YOU.

And Robin was a great comic and yeah, the new Nobody isn't groundbreaking but like you pointed out, I do like the juxtaposition of the two apprentices.