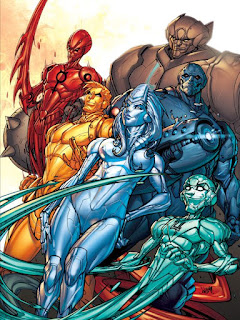 DC is trying. They'll be releasing eight new limited series based on fan favorite characters such as The Metal Men, Swamp Thing, Poison Ivy and Sugar and Spike.

A new Sugar and Spike series.

And smartly, instead of making a bunch of series that should have been limited series to begin they're producing them as finite.

They probably won't set the world on fire but these are the most DC Comics-looking DC Comics I've seen in a while.

Comments:
"Klarion" shouldn't have been a problem, but DC decided to hand it over to Ann Nocenti. Take a look at the reviews of the other DC comics she'd done prior -- "Green Arrow", "Catwoman", "Katana" -- she was clearly not one of DC's top talents, at the very least she needed an editor willing to rein her in.

But back in the day, when she was an editor or assistant editor at Marvel, Bob Harras was her assistant. Dude is now editor-in-chief at DC, and I would bet anything that's how Nocenti keeps finding work there.

And really, I would say that Harras has something to do with DC's case of Marvel Envy. He's not alone in it, of course; and I wouldn't be surprised if he was hired from Marvel to duplicate the "magic" of the 90s X-Men. As fate would have it, in googling Harras, I found this intriguing article:

... I didn't go into this with an intention of ragging on Bob Harras, but it looks like he's got it coming.

The thing was was that her Daredevil work was actually pretty good but that was well over twenty years ago. And the phenomenal John Romita, Jr. artwork certainly helped it along.

That was a long time ago and the output following that was just not... very good and didn't serve many of the characters she worked on, IMO.

And I think, a lot of what works at Marvel simply doesn't translate to DC. I read a fair amount of Nocenti in the late 80s -- I can point to stories in Spider-Man annuals and "Longshot" and even some "Daredevil" -- and they were more character pieces than narratives that had to get from one point to another. Since DC is (at heart) about crime-busting, it's usually necessary to craft a story that involves a trail of events (crime / clue / confrontation / escape / further investigation / etc) and I don't recall a lot of evidence of Nocenti thinking that way.