My Latest Bleeding Cool Article: The DC Universe And The Rebirth Of Joy? 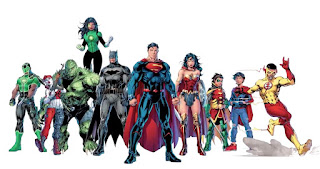 Got a chance to do a new article for Bleeding Cool and got out some hopeful yet wary thoughts on DC Comics' upcoming "Rebirth."

Comments:
Very very nice! It's way too early to say, but I would very much like this next reboot to fix things to your satisfaction (as well as mine). It doesn't seem that hard a concept, just position the characters so that they're in a good place for storytelling, and then resist the temptation to go Zack Snyder. It's okay to change the characters up some, just keep them true to themselves and the rest will follow (see "Grayson" for example).

I didn't need for DC to put things back where we left them. I just want the things I read to be acknowledged as vital building blocks within this universe.