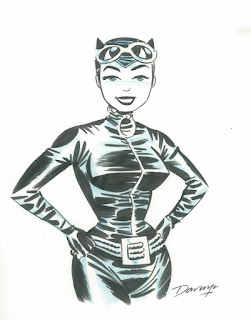 Got this beautiful piece of art from Darwyn Cooke at Baltimore Comic-Con a little while back; standing in line three hours before the convention opened and four before he arrived.

I wound up being fifth in his line and some guy comes up counting like a schoolteacher counting heads, "One. Two. Three. Four." and puts himself in front of myself and a friend.

We just stared at each other like, "WTF?!?" and proceeded to basically declare in no uncertain terms that we were there first and would f*%k this guy up for even TRYING this nonsense.

Darwyn Cooke had a penchant for leaning towards writing and drawing tough guys and gals such as Batman, Catwoman and Wonder Woman. On top of that, he was sort of known in quiet whispers as kinda "ornery," himself.

As we helped this man learn which hills to die on, the look on Darwyn's face was priceless.

I can legit say that I stood up for myself in front of the man known for drawing a Wonder Woman who absolutely towered over Superman.

Telling him, in no uncertain terms, that if he didn't like the way she did things, well...

Thank you for all you've done and more, Darwyn.