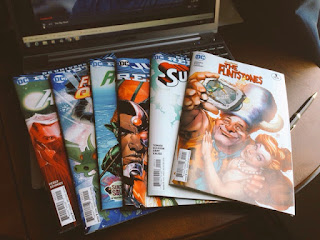 It's good to have DC Comics you look forward to reading again.

Comments:
VERY glad DC is doing some things right for once! The way I hear tell, Geoff Johns has talked to every creative team and made sure they have good visions for their characters. I don't like Johns's universe-fixing much, but when it comes to individual characters, he's golden.

"Green Arrow" feels, for the first time in a very long time, like it's about Oliver Queen and not some completely different character with a coincidentally similar name, who gets turned into a werewolf more often than he uses his bow.

And "Superman" ... between Tomasi and Jurgens, we finally have two writers who actually understand what a good Superman story is like. I swear, the nu52 Superman was a worse Superman than several of the deliberately-flawed Elseworlds Supermans. While he's probably not really dead (Quarrmer / turned to ash / decoy / Clark and Superman are different people right now), I know I don't want to see him again.

Side note, just wanted to let you know you were right all along about the "Wonder Woman" TV show. I've been catching reruns of it, and it's not just eye candy / low special effects extravaganza like I remember it. Oh sure the eye candy is exquisite, and she rarely gets into scrapes more science-fictiony than Starsky and Hutch, but they very much get right that Wonder Woman is about changing people's minds and hearts if she can. Which you figured out years ago, and I'm only starting to clue in to.

There was one scene I really liked in one episode, where bad guys hid an ultrasonic device in a horse's saddle so they could drive the horse mad with ultrasonic noise whenever they wanted to. So how does Wonder Woman handle it? First she calms and comforts the horse, then she finds the device and throws it into the ocean. You can probably say that, given the limits of 1970s special effects plus standards and practices, there was no chance Wonder WOman was going to beat the horse into a pulp with her fists. But nevertheless they got it right. Joss Whedon was correct for showing us that heroines can kick ass, but maybe, just maybe, they shouldn't all the time.

Which is why I love the "Supergirl" show as the perfect example of the heroine who could kick any ass she wanted, but generally prefers not to.

Rucka's Wonder Woman has been nothing short of incredible. After a nearly decade long layoff, he comes back with so much more to say and I'm just falling in love with his WW all over again.

Superman has been great as has Arrow. Otto Schmidt is doing stellar work and I can even forgive them for keeping Canary a singer.

I forgot to give you this:

Hope you like the direction they're going with Black Manta. I think I'm for it.