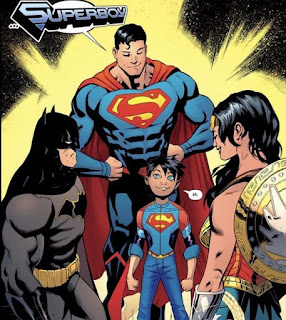 Comments:
Great article! But of course it was.

I have to be honest, I haven't had it in my heart to read comics for about a year now. The contentious primary season where it felt like too many people were ignoring the threat Trump posed, followed by the general election where they let Trump in, followed by the months and months where people were trying to relitigate the primaries ... that part of me that could envision a better world, is pretty well battered and bruised.

That said, I have occasionally found it in me to read Tomasi's Superman / Superboy / Robin - oriented comics, because they're just too right. This is the Superman I knew was out there, somewhere, that DC could write about any time they wanted to. He is the hero we need AND the hero we don't deserve (not that he would even notice).

I also read the occasional "Green Lantern" because I can still occasionally find inspiration in a guy whose super power is that he can't be cowed. In case you wondered what anyone would ever see in Hal (and I know you have), that's what it is at least for me: reduce Hal to his core, and he's the guy who would punch Darkseid in the chops because, if he could do nothing else, Hal would make sure Darkseid knew he was unimpressed.

One of these days, when my head is in a better place, I have ginormous stacks of comics to get through, and I'll be glad to have them.

Trust me, I understand. It's a hard time in America for anyone with compassion and empathy in their hearts. I didn't write anything from about September until late April.

Everyday, you turned on the news and it was something different. Finally, I realized he's a ridiculous human being and stopped trying to wrap my head around the math folks were doing to justify his being where he is and found a bit of myself again.

All of that to say, don't ley this individual steal your joy or your passion. Do as much good as you can. Speak up when necessary and practice self-healing as well.

Find the things that bring you the most joy and reclaim them.

I sincerely hope you'll do that for yourself.

It's good advice. ... I just wrote and deleted a thing about how the problem isn't Trump but the people who won't lift a finger to stop him, but then I realized you are vastly more familiar with the problem than I am (I'm a white boy who grew up in a lily-white suburb) so there's no point in lecturing you on frustration with allegedly good Americans.

Instead I will try to follow your example, because you seem to know the path back to balance.

It's really all you can do.