CBR's Brian Cronin Answers My Question: Was Huntress Going To Be The Queen of Checkmate? 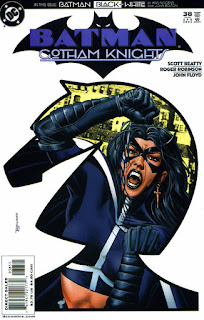 Buddy Brian Cronin of CBR answered a question that's been bugging me for over a decade, "Was Huntress going to be the Queen of Checkmate?"

The answer has finally been told!

Be sure to follow Brian at CBR as his stuff is some of my favorite in comics fandom.

Comments:
Last time I looked, Helena Bertinelli is the head of Spyral, so this kind of sort of came true in the nu52.

You know, I think about the nu52 and why it leaves such a bad taste in people's mouths. And I'm left to conclude it comes down to two things:

- Wally West was gone, and when he came back, they decided the best way to revamp him was to make him a black kid who needed a white mentor to steer him away from a life of crime. Because there's not a ton of racist innuendo in all that.

Beyond that, the nu52 was, I think, an example of DC taking some risks, some of which paid off (Grayson, Catwoman's crime lord phase, Swamp Thing, Azzarello's Wonder Woman) and some that didn't. That said, as you once observed, never have all of DC's characters been in "experimental" mode all at the same time!

It's actually the old template. Discovered I could bring it back and promptly did.