A few years back, after shuttering Seven Hells!, I, along with some of my favorite bloggers and writers, went off and formed a new collective blog, "Second Printing." It lasted for a good while and while there I did a lot of work I'm proud of. What I thought I'd do is revisit some of the work I did there and update some of the ideas for where comics are at this very moment in time. 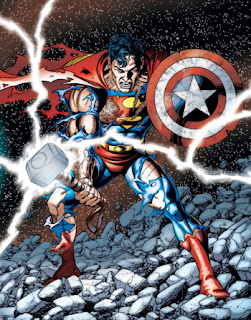 First up, The New Mythology, Revisited:

The old god lay broken and battered. The hammer of the god lay silent, in need of a champion.

“Whosoever holds this hammer, if he be worthy, shall possess the power of Thor.”

The man from another planet reaches down, grasping for the power of a god. He is found worthy.

With that, the war is won.

With that, a war we had no idea was being waged had been won. Superman, the champion of our new mythology, won.

The superhero, won. It took up the mantle of mythology and won.

That was my first thought upon reading the final issue of JLA/Avengers, issue 4. Comics are the new mythology.

In this mythology, men like Maxie Zeus, with his delusions of godhood, ultimately defers to the guise of one of America’s greatest contributions to the new mythology, the gangster.

In our medium gods are secondary. In the case of SHAZAM!, the gods grant power and get out of the way. Hercules gifts a young boy with his strength leading to the youth's becoming known as "The World's Mightiest Mortal."

In Greg Pak and Fred Van Lente's Incredible Hercules run, he has to side with The Hulk to remind everyone of how incredible he is. In the pages of Captain Britain and MI:13, Excalibur, sword of King Arthur, is now in the hands of a daughter of immigrants.

The new mythology is Jack Hawksmoor of The Authority, born and bred to master the urban settings of glass and steel, making him the first truly new superhero creation of The 21st Century.

In the Wonder Woman movie she is given the name, "The Godkiller."

The new mythology is Jane Foster taking up the mantle of Thor while dealing with breast cancer because The Odinson is found unworthy, again.

Sometimes, we forget we’re the keepers of this new mythology.

Mythology, new and old, is forever and right now.

How we keep it is up to us.