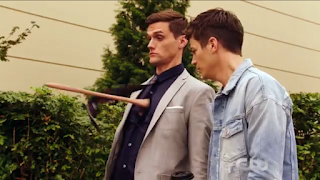 Comments:
Yeah, what the hell was wrong with DC that they thought wrecking the Dibnys would make things better in some fashion?

I also hear that, in "Infinite Crisis", Didio felt that somebody had to die for there to be any emotional weight to the story, and the original Superman wasn't enough, so he was ready to kill off Dick Grayson too. What the shit ... ? What sort of brain-damaged attitude towards DC's characters, universe, and history is that?

People complain about character resurrections, but really, the resurrections aren't the problem; the problem is people killing off the characters in the first place. It's like the kid who breaks all the action figures in the community toy box because he feels it's not a good play session if all the toys remain intact. That kid earns every swirlie he receives.

If anyone ever lost their mind and handed me Justice League, Ralph would be my first pick.

I think he's a character full of unlocked potential.

This blows my mind. I freaking LOVE EM. I remember the "and stop tugging on my ear" like from (I think) a Batman comic. I remember from the Satellite JLA comics when HE was the one who saved the team after they were all locked up in some sort of stasis. Kudos sir. So psyched to see a great write up of him.

You know a character is great when you begin to refer to them by birth name. Ralph is the greatest and his best solo adventure, IMO, was in The Elongated Man mini from the mid-eighties.

Drawn beautifully by Mike Parobeck and Ty Templeton, it, unfortunately, was written by Gerard Jones who's currently facing child pornography charges so it'll never be reprinted and pushed me to shred my copies.

So far, there are no allegations that he actually molested any actual children. That's good.

Somewhere I read that some of his material involves children as young as one year old, but I need more info on that. That could mean sexually abusing a child, or it could mean there was a one-year-old in the room while his or her mom was knocking boots. The charges are too unclear to really know.