Geez! Last week, I finished the comic book orders for June and man, for the first time ever it made me tired. The "war" between DC and Marvel goes full blast in June as Marvel unleashes "The House of M" upon a very suspecting public while DC offers up the road to "Infinite Crisis," along with 2 more entries into the 30 issue "Seven Soldiers" mini-series. Oh, and let's not forget "DC Special: The Return of Donna Troy, after that I STILL had to spend within the budget to order the monthly comics, trades, toys and other assorted comics fare.

Am I complaining? A bit. If done right, we stand to make money. It's just that the stakes seem so much higher lately. June's House of M isn't generating the buzz you'd expect from something so huge and since April's offering of X-Men: Age of Apocalypse 2 tanked in my store, I'm not particularly inclined to bet on "The House."

On the DC end of things, I'm more than a little concerned with their recent spate of "sell-outs."

OMAC Project #1, Day of Vengeance #1, Villains United #1, all "SOLD OUT" at the publisher. Good for the publisher, bad for me, the retailer. I have to ask myself all the time now, "Was what I ordered nearly two months ago, good enough?" With the "sell-outs" happening with more frequency, the ability to tweak my numbers has sort of been taken out of my hands due to the wants of others. Don't these people know that the wants and the needs of my customers ALWAYS come first? Are other retailers all in such a rush to watch extra copies sell slowly on their shelves or sit in their backrooms to yellow while I could be brilliantly selling them? (I'm being wacky again!)

Last Wednesday, I was told that the latest Flash, Batman and Wonder Woman were all sold out. GRRRRR! Did I mention May's Flash and Wonder Woman have ALREADY sold out a month before their "release?" 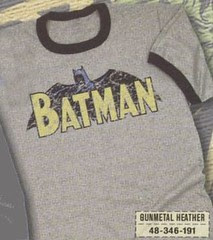 Batman
Originally uploaded by Devon Sanders.
Trust me, it's been a pretty horrific day. What could go wrong, went wrong. If there's any one thing I'd want to take from it was this: While walking to clear my head, I heard someone humming the theme to The Batman TV show, walking past me smiling. I remembered just how much light that show brought into my world. Suddenly, my day didn't seem so heavy anymore. 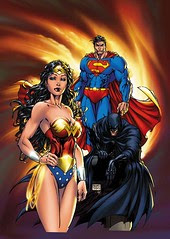 The Big Three
Originally uploaded by Devon Sanders.
The more I hear about DC's upcoming plans for 2005, the more intrigued I become. From what I hear, the premise of Infinite Crisis is "Imagine the worst day of The DC Universe. The villains win while, philosophically, Superman, Batman and Wonder Woman are far from being on the same page ."

Villains winning while the heroes in-fight? The summer should be interesting, as we get to see The Big Three act like Marvel characters.

What Makes A Hero?

Beautiful things happen everyday in the comic shop that I manage. Last Wednesday, the customers and I got into a huge debate over whether The Batman is merely a hero or a superhero. (To me, he is the greatest of SUPERheroes.) There was no question that Batman is truly a hero but I was shocked that more than one person in the store shared the opinion that it takes SUPERPOWERS to become a SUPERHERO.

Yes, Batman has no superpowers. Neither does Lex Luthor YET we firmly consider Lex a SUPERVILLAIN. What exactly constitutes the "super?" IMO, it's all about the measures the hero will go through to ensure the safety of others. Is Lex just as great a supervillain because of the lengths he's willing to go through to ensure one's demise?

Batman is a superhero simply because his every action bears the truth. He is simply a man made extraordinary because of the scope of his quest. Is Jason's quest for The Golden Fleece somehow less diminished becauseit wasn't performed by Hercules? Jason's effort was certainly "Herculean," wasn't it?

Think about The Blue Beetle's death. Because of Beetle's lack of power, his demise certainly resonated with more power than Superman's. Was it deminished any due to his "lack of power?" No, it resonated with us because in his death, Beetle found his "power" through his humanity.

Think about the deaths of The Doom Patrol. Yes, they had powers but their "greatest adventure" was their last. When faced with the choice of saving themselves or the lives of 14 people, they made the only choice superheroes make: the unselfish one.

THAT made them superheroes. Not the ability to grow bigger. That is, I believe, the same decision Batman would make. That, to me, makes a "superhero."

Amazing Spider-Man, the comic, along with Marvel as a whole, has grown stale, tired and found lacking in focus. Lately, Spidey's stories go absolutely
nowhere with nowhere to go but down.

Marvel's become a two man show, as of late, with Bendis and Millar acting as the voices of Marvel. While at one time, I found them to be fresh and innovative, they now grates on me. Characters talk at each other, trying their best to sound out their way of the murk that has become dialogue. Plots start out like a ball of fire, only to end abruptly. It seems as though they write to get to the cool parts without fully thinking out how to end the story. They're hitting the same high notes, seemingly in love with the sound of his own voice. Ask Mariah Carey or Whitney Houston what that will get you in the long run.

I'll take Geoff Johns any ol' day over almost any writer. What I love about his writing is that we haven't been able to pin him down. He gets out of the way and let's the characters "speak." His Flash is Mike Baron. Marv Wolfman. Bob Haney. Bill Messner-Loebs. Mark Waid. In this he's created an "Ultimate" Flash. Does DC need to call it that to call attention to it to get us to read it? No. It's been selling out for a damned good reason. We come to it because we want to be there. We want to be there to see history being made. Again. We want to see DC's rich history and characters evolve, again. Not Magneto vs. The X-Men...again.

Take a look at one of my new favorite comics, Manhunter. There's history all over that book and yet, it's written with an eye towards the future.

Why do you think we all went ape-shit when Amazo popped up in Batman last month. History. We know a good Silver Age battle when we see one. A good writer will get out of the way and let the characters work
for them. The characters should give the scene voice.

That's why I'm making mine DC!

I've had Steve Ditko on the brain lately. Not "The Amazing Spider-Man Ditko," but a Charlton Comics Ditko who's mind brought us the beautiful weirdnesses occupying The DC Universe. The former Charltonians, The Question, Nightshade, Captain Atom, Blue Beetle and yes, Punch and Jewelee. Over on the venerable Scip's blog, The Absorbascon, he posed the question, "Are The Charlton Heroes due to exit The DCU?"

Here's why Ditko's been on my brain lately: If The Charltonians are due to leave, where do they go? Precedent says the rights COULD revert back to the creator and who created them?

Could DC Comics, twenty years ago, have signed a deal we'll soon see expire, sending the rights to Blue Beetle, The Question, Nightshade, Capt. Atom and Punch and Jewellee back to their creator, Steve Ditko?

Let's look at the evidence:

Capt. Atom: Dead
Blue Beetle: Dead
Nightshade: Due to take on The Spectre.....Dead.

Is DC preparing to do what Marvel would never do and give a creator back his creations, even if they're bit worse for wear?

Only time will tell because The Question ain't commenting.

For When You're Feeling Sinister...

Here I am. Devon Vincent Sanders.

Born and reared in Washington, DC, I'm the eldest of five boys and a lover of comic books. DC Comics, more specifically. So much so that I manage THE comic shop in the Georgetown District of Washington, DC, Beyond Comics 2. I also happen to write comic reviews for the movie critique website, CHUD.com. Thor's Comic Column, to be exact.

I've been reading comics for twenty some years so I know everything, as you'll soon see, so don't question me. Assume that I'm right.

In the blog, I'll bleed four colors, expanding on comics in a way that writing just reviews won't let me. Also, when I'm feeling sinister, writing about whatever nonsense comes to mind. I hope to make it worth your while.

There is very little to dislike about a backwards talking, raven-haired beauty clad in thigh-high stockings and a top hat. Truly very little.

Before Identity Crisis, there really wasn’t much to dislike or like about Zatanna. She’d always been nothing more than a fantastic visual. A vision in fishnet stockings.

Let’s regard Zatanna and her mindwiping Batman in Identity Crisis, shall we? She did it because the other Justice Leaguers told her to. Why’d they ask her? That’s what you do with characters who’re just …there. She’s been a member of The Justice League for twenty-plus years. Someone point out the one great pre- Identity Crisis Justice League: Zatanna story? No, you can’t. There aren’t any. She’s one of three DC characters that can crossover into The Vertigo Universe. (Swamp Thing and Animal Man being the other two.) Why isn’t that being played up more? You have to ask yourself, “Why does a woman who has access to some of the most eligible bachelors in The DCU go out of her way to lie down with the vile John Constantine, Hellblazer.” Of late, Zatanna’s character has become defined in her faults. So what’s a Justice Leaguer to do when she’s having another really bad day? Leave it to writer Grant Morrison to have all the answers in Seven Soldiers: Zatanna #1, on sale now.

The world is about to end and Zatanna’s visiting her superheroes with low self-esteem support group. Y’see, Zatanna got drunk and naked, except for the fishnets, cast a spell, unleashing the man of her dreams onto the world, killing some of the DCU’s greatest magicians in the doing so. In the process, she also managed to lose her ability to cast spells. The world’s coming to an end and Z’s got no powers. So what’s vacuum-abhorring nature gonna do for Z? It gives her…a sidekick.

Grant Morrison gets his metaphysical freak-on and takes us down a road less traveled in The DCU, proper. Morrison, in 22 pages, gives us Zatanna’s origin, revisits a classic Swamp Thing tale and shows us the promise of bigger things in The Seven Soldiers’ future. Morrison, once again, proves himself to be a master of characterization, as the characters in Z’s support group are an absolute hoot and personally, I hope they see daylight again, someday. Also great in this issue is the reward you’ll get if you’d previously read Seven Soldiers #0.


Artist Ryan (Hawkman) Sook can draw one hell of a babe and again, he doesn’t disappoint with Seven Soldiers: Zatanna. His Zatanna wears her every emotion in her face. Sook easily takes her face from wild-eyed wonderment to wild-eyed weariness in just a few pages, perfectly conveying the emotional rollercoaster Morrison’s put her on. When he’s not drawing exquisite faces, he’s drawing exquisite imagery. Trust me, pages 10 through 13. You’ll be hard pressed to find more thoughtful imagery anywhere else.

I've been forced to do this. I have nothing to say to you today. That will have to suffice, for now. Who knows what will lie in my heart tomorrow.