And With The Glow Forming Around His Head, Black Lightning Achieved An Almost Messianic Status Amongst Black People... 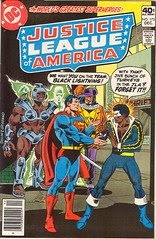 Sir, I Assure You, I Am Not A Turkey.
Originally uploaded by Devon Sanders.
Today, I salute Black Lightning and what better way than to do it with the seminal piece of Black History that is Justice League of America #173.

After Green Arrow decides The League needs some "color," they proceed to STALK across him the rooftops of Metropolis' Suicide Slum! After Arrow vouches for Black Lightning, The Flash proceeds to chastise Green Arrow saying, "I never thought YOU would suggest we take a TOKEN BLACK..."

Returning home from fighting crime all-night, Lightning's alter ego, Jefferson Pierce, needs some shut-eye. He has to TEACH HISTORY CLASS in the morning. So, what does The League do instead of asking him to join in a civil manner?

They attack him! Zatanna dressed like an ape-woman promptly gets her ass kicked. The Flash calling himself "Trans-Visible Man" trips him up and then, proceeds to kick him while he's down! And THEN, when you thought it couldn't get any worse, Green Arrow dressed as "The Swashbuckler," tells him, "You're fast, matey, but you're not fast enough to escape a ball between y' ribs!" As if Green Arrow's inappropriate choice of words wasn't bad enough, he then proceeds to shoot him!

After being kicked and shot, Black Lightning does what ANY Black man would do at this point...

Meanwhile, while The League is busy hazing a man who's NEVER expressed any interest in joining them, a S.T.A.R. labs security guard lies dead, attacked by mind-controlled rats.

I can't make this stuff up!

As an interesting aside, after Batman's leaving The League due to its' Byzantine infrastructure, Batman left to form his own group, The Outsiders. Who was the first person he recruited? Black Lightning. And, how do Batman accomplish this feat?

ASKING someone to join a team. What a novel idea.

If getting shot at, being kicked while you're down and "getting a ball between my ribs" is "affirmative action" then you "jive turkeys" can count "The Black Manager" out, as well.

Comments:
Yeah, but superfluous battles are the secret handshake of the superhero community.

When it came to initiation tests, the silver-age Legion, for example, were UTTER shits. Ask Scip.

It was refreshing to see Bats ask Lightning to join the Outsiders, but if you think about it, look at who ELSE he let into their august ranks.

If Batman had used the standard "put up your dukes" initiation approach, Black Lightning would still have sailed through. Looker, however, would have been KO'd before she could put on her heels.

It's VERY Legionesque! Without reading the story, though, I'm still guessing that Black Lightning didn't say "choke" or "sniff" but rather "@#(*$&@, you turkeys!" as he fried Ollie's bum a toasty red.

So, I forget, did he join the JLA or tell them to stick their fingers in a socket?