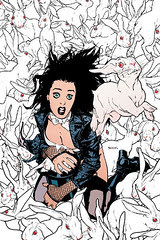 She Slept With Keanu
Originally uploaded by Devon Sanders.
A while back, Scip Garling and I were talking and I broached the question, "Do you think that Zatanna's mindwiping of Batman in Identity Crisis made him worse?" Well, the events in "Countdown To Infinite Crisis" and "The OMAC Project" kind of bear this out, what with Batman being all paranoid and stuff lately.

Let's look at some of the facts, shall we? Before joining The Justice League, our Batman was quite the loner, until he took on a junior partner, Robin, The Boy Wonder. Some would say Robin had a calming influence upon The Batman, an influence so strong that it helped Batman see the bigger picture. The world is bigger than Gotham and the world needs protecting. Now, Batman goes off and joins The Justice League of America to fight the good fight. Then, something weird happened. Batman started acting more like a superhero and less like a dark vigilante, adapting his symbol from the black bat that used to stretch across his chest to a more "superheroic" small black bat encased in a yellow oval symbol. Batman played well with others for a good long while.

After attempting to put an end to The League's mindwiping of Dr. Light, Batman received one of his own from The League's resident magician, Zatanna.

And then Batman got all weird. He fired Robin for spending too much time with other superheroes, eventually taking on a newer, edgier Robin, Jason Todd. Batman soon quit The League over philosophical differences, forming a new team, The Outsiders. A team that he eventually went on to disband after he tried to keep an actual war secret from them simply because it wasn't HIS war.

Are these the actions of a sane man? I think not. Did The League, at one time, have a kindler, gentler Batman on their hands only to let him slip away? That's the question that welcomes debate.

Comments:
You may be on to something, there.

But I tend to think the PTB weren't thinking quite so long range. I suspect they wanted us to equate his very recent uptick in paranoia with his memories flooding back.

But we still haven't gotten a timeline for WHEN Bats built the brother. Hmm.

He fired Robin for spending time with other superheroes? I'd never heard that.

Tell me more; any links?

You know, I never thought about that, but now that you bring it up..