Deathstroke, Who Does Your Tassles? 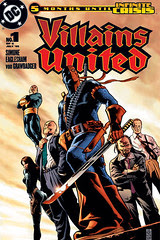 Deathstroke, Once Again, Overdressed For Lunch at T.G.I. Fridays
Originally uploaded by Devon Sanders.
Quite the assemblage of villainy, huh? Lex Luthor, The Calculator, Deathstroke, Dr. Psycho, Black Adam and Talia. Want to know what I find even more impressive?

I can't help but remember DC's Silver Age. When a villain found his or her "thing" they went all out with it. If you called yourself The Clock King, then, by God, you wore a clock on your head. "The Golden Glider?" Gold mini-skirt combo with ice skates. Classic. "Crazy Quilt?" Fella dressed like a quilt.

Now? DC's villains dress like Enron executives. Is this a commentary on our society? Yes, it is. Today's villains move in silence, with ninja-like precision, cutting benefits, robbing pension funds.The new "dress code" for the villains of Villains United #1 reflects our perceptions.

Far right: The Calculator, former possessor of a skintight purple outfit with a calculator keypad on his chest. Now? He dresses like the man who ran away with your money and your wife.

Next to the guy with the sword? Dr. Psycho. Translation: Doctor Crazy. Need I say more?

An evil businessman, an evil "stock" analyst and a crazy doctor.

They're scarier than the guy with the sword.

Comments:
Well, historically, Dr. Psycho and Luthor usually dressed "normally". Okay, Doc P used to a wear tux, but for most of his career, Luthor wore either ill-fitting brown suits or the grey prison suit he never bothered to change out because, being smart, he knew he'd just be going back to prison at the end of the story anyway.

Take a look at that cover.

Half of them have been around since the Golden Age.

Two of them haven't had even a teeny costume change in their history.

Going to the Venn diagram, we see only one character smiling at us balefully from the intersection of the above sets:

He's, like, some kind of sartorial cockroach. Hasn't changed since 1945, doesn't need to. There's something simple and, hence, powerful about his whole look that reads: Essence of Super-Villain.

Compare that to the only other guy whose costume hasn't changed: Deathstroke. Man. Fussy, overdone, filled with extraneous detail.

And somebody please fill me in on the combat advantage lent by boots that double as bell-bottoms.