Number Three Of The Seven Deadly Signs Of Villainy! 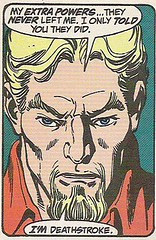 Deathstroke
Originally uploaded by Devon Sanders.
Whoa-ho-HO! Now, we're talkin' EVIL! Nothing and I do mean NOTHING says evil like...

Rumor has it Satan has one, too.

I implore you not to grow this dubious form of facial hair. There's no medical evidence to support it but it will turn you evil. Ask our friend, Deathstroke, here. Look at him! He's lyin' to someone as I type this!

After growing a goatee, Deathstroke started killing for money and having sex with buck-toothed minors. That's right. The worst of the worst, Deathstroke is among other things, A PEDOPHILE.

Just when you thought, he couldn't get any worse, Deathstroke was last seen teaming up with the BALD AND EVIL Lex Luthor.

YOU HAVE BEEN WARNED!

Comments:
Are there any bald, monacle wearing, goatee villains?

Hope you'll spend some time on one of the most deadly of the seven deadly signs of villainy:

Agreed, Devon; that's how we know Green Arrow is evil.

Shane, such a person is not possible. They would simply EXPLODE from being too evil.

Villanelle? Cortisone will clear that up nicely, Glen.

Yeah, especially since he's also got a cigarette holder, which just HAS to be the fourth sign....

Cigarette holder is not No. $, friend. Four will be revealed...TONIGHT!

Universo is bald, has a goatee, and wears a monocle.

Therefore Universo is the most evil person in the DCU.

BTW, I decided to shave off mine yesterday. I think I'll go and pet a kitten.