Rock And Roll Will Lead To Heroism, Drug Use and Baby Mamas 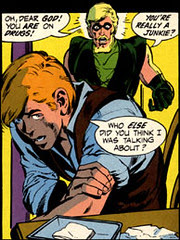 Well, who DID you think I was talking about?
Originally uploaded by Devon Sanders.
Just the other day I was reading a Nightwing comic and out nowhere this Jane's Addiction song, "Stop!" came on and I thought, "How right is that? Dick Grayson would be a Jane's fan." Their music being frenetic yet oddly melodic sort of reminds me of him, in a way. Well, it got me thinking, "What music do comic book characters listen to besides psychedelic stylings of Roy Harper's "Great Frog?"

See, I think Zatanna would be a HUGE Nina Simone fan. I picture her drunk (again), burning incense, wanting "a little sugar poured into her bowl."

Kyle Rayner (Green Lantern), HUGE Queen fan and doesn't get the irony, at all.

So, my question to you is this: What music do you think befits a superhero? Remember, no suggestion is too stupid. No song or character too insipid. Have fun!

Comments:
Clark Kent is from the heartland; he listens to country music. I'd like to think he's not a fan of today's overprocessed Faith Hill/Garth Brooks crap. No, I see him being fond of the kind of sad, lie-on-the-floor, heartsick female singer/songwriters whose music makes you pine for your dead homeworld. Emmylou Harris. Nanci Griffith. Iris DeMent.

Despite the crewcut, Guy Gardner is all about the 80s hairbands. Knows all the words to every Skid Row power ballad ever penned.

Tim Drake listens to Magnetic Fields and Sterolab and The New Pornographers and Interpol and Tindersticks and every so often dusts off an old Portishead, Blur, Pulp or Cibo Matto disc. Thinks Franz Ferdinand is good but terribly overhyped. Because he's just exactly that cool.

Superboy likes Bon Jovi. Because of the tattoo.

Oliver Queen will talk your ear off about how groundbreaking the Beach Boys' Pet Sounds album is, if you give him half the chance.

Black Canary is big into L7, The Breeders and Sonic Youth.

THAT made me laugh out loud at how right you are.

No one else wading into this ankle-deep puddle of wankery?

(Um. Ew. Just skeeved myself out, there.)

I see him as a guy whose tastes are decidedly retro and Rat Pack-y. He has a poker night, at which Esquivel's Space Age Bachelor Pad Music gets big play.
Prez Prado, Frank, Dino, Tony, Sammy. Oh, and: Box sets, not vinyl. He's a dilettante, not a serious collector.

He does own a vinyl copy of "Calypso... Is Like So," which is, of course, Robert Mitchum's calypso album. He got it so he could play it for his poker buddies and make fun of it, but soon found himself secretly falling in love with it. Now, after a rough night of ring-slinging, he turns out the lights, cranks up Mitchum's "Mama Looka Booboo" and dances around his living room in his socks.

I think when no one is around, Batman puts on the Rocky Horror Picture Show soundtrack.

J'onn wants you to think he's all about the otherworldly, the exotic, the uncanny, the utterly alien. He'll tell you he listens only to whalesong and to the ambient ultra-low frequency keening of solar winds.

He loves Oreos, though, so it can be reasonablly inferred that this taste for things that are sugary, empty, highly processed and ultimately bad for you extends to his music.

Wally West, The Flash? Big Dave Matthews Band fan. Tempos never change to much. Lyrics don't require much going over in his mind.

Power Girl? Bowie fan. Likes some early T-Rex, hates Sweet circa "Your Love Is Like Oxygen."

Plastic Man -- I was going to say Barnes and Barnes, Weird Al, Spike Jones, etc. You know, all the cheesy novelty stuff from the Dr. Demento Show you bored people with in high school, that you bequeathed to your little brother when you left home.

But no. Plas is all about They Might Be Giants. They're made for each other.

Aquaman: Toughie. Whalesong is too obvious. Atlanteans not known for the tunesmithing. I'd have to imagine that the first music he ever heard was whatever his lonely lighthouse keeper father had lying around. What fits a lonely lighthouse... I'm thinking Coltrane, Miles Davis, Charlie Parker on scratchy vinyl. A few sea shanties thrown in there, naturally.

Who've we left out?

Aquaman would be a Nat King Cole fan, no doubt. Cole sounds like a cool breeze. I always picture Aquaman, standing on a rock, waves crashing around him, enjoying a cool ocean breeze.