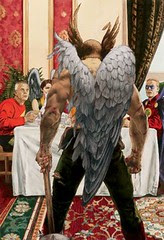 Dammit, You All Couldn't Just Wait?
Originally uploaded by Devon Sanders.
Well, I'm sure you're wondering why I suddenly changed the name of this blog from "If You Had A Brain, You'd Be Dangerous" to "Seven Hells!" The answers were simple really...

One: I could barely remember what it was called, myself.

Two: Last night, while hanging out with blogging's current "IT" boy, Scipio Garling of "The Absorbacon" fame, we were discussing the coolness of the superhero exclamation. You know, like Superman's "Great Scott!" and my favorite, Wonder Woman's "Suffering Sappho!" (I'm big in lesbian circles.) Scip suddenly shouted out, Hawkman's "Seven Hells!"

I, then, proceeded to force feed him his Tourette's meds.

Upon his calming down a bit, we'd both realized we'd stumbled upon THE name for this blog. Two words, speaking volumes. Two words building upon two fans' love of DC Comics. Two simple words describing everything I'm doing through lately.

Three: I was told once that it would not be a strange thing to see me discussing music and art, one minute and running shirtless down the street with a mace in my hand, the next. I thanked them for the compliment.