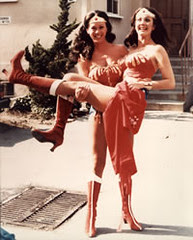 Jeannie Epper and Lynda Carter
Originally uploaded by Devon Sanders.
See the woman holding Lynda Carter? That would be Jeannie Epper, Lynda Carter's stuntwoman from the Wonder Woman television series. If Wonder Woman needed to jump from a window, she was the one who did it. Horeseback riding: Jeannie Epper. You name it she did it, further adding to my enjoyment of this wildly watchable series.

So, why would I swoon? She was in Washington, DC, promoting a documentary on Hollywood stuntwomen, Double Dare. Well, she stopped in my store on Saturday, looking for, you guessed it: Wonder Woman comics.

She was just as nice as can be and one of the sweetest people I've ever met and best of all, in the middle of working, made me feel like a kid all over again..

Comments:
Wow! That is a great picture on so many levels.